Children’s Day evokes mixed feelings among Govt school students Give us our due : Heirangoithong HS 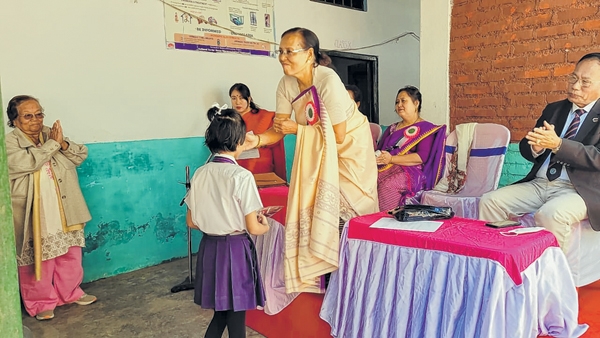 By Our Staff Reporter
IMPHAL, Nov 14: Even as the country observed Children’s Day on the birth anniversary of the first Prime Minister of India, Pandit Jawaharlal Nehru today, students of Heirangoithong High School had one wish--attention of the Government to provide them the infrastructure they deserve.
Feeling neglected for years, Children’s Day was a day that evoked mixed feelings for the students.
On this special day for children, the school students banked on the advice and drew inspiration from the school’s alumni, teachers and school committees to be at par with students of private schools.
But on the other side, the ramshackle condition of school including broken walls, congested rooms with broken doors and windows, and computers which break down more than they work, among other laxities of the Government have left them disillusioned.
Some out-spoken students of the school said that their school has been completely ignored for years by the Government and the Education Department despite several complaints made by the school authorities.
For the last few years, Heirangoithong High School has been running with the optimum support from the school’s alumni association, school teachers, school management committee and the Academic Development Committee after the Government turned a deaf ear to the repeated pleas of the school authorities to improve the school infrastructure.
Imphal College retired Principal, Professor Laishram Randhoni, who is a patron member of the Academic Development Committee since its inception, has been attending to the needs of the school. She decried that the lackadaisical attitude of the State Government has traumatized and paralysed many of the Government schools.
While pointing out that many popular Government schools, including “Raja Dumbra Singh High School” and the “Singjamei Girls’ Higher Secondary” had been closed down, the retired College Principal questioned whether the State Government is actually trying to improve or decommission the Government schools.
She opined that the abolishment of multiple Government schools in the name of developing a few Government model schools is contradictory to the doctrines of the SDGs–4 (Sustainable Development Goals) and will aggravate the education sector of the State.
“The Government must look after all its educational institutions inclusively and must extend ample financial assistance under a strict monitoring and strict administrative system,” Randhoni added.
When asked about the initiatives taken up by the Academic Development Committee of Heirangoi-thong High School, she asserted that the concerted effort of the development committee, SMC, teaching staff and alumni association of the school has improved the condition of the school to some extent.
She said that the condition of Heirangoithong High School was quite pathetic and it almost looked like an ‘alcohol vendor’ before the committees took initiatives.
She informed that the teaching staff of the school are bearing the expense for operating two vehicles for the transportation of the students from far off places. The alumni association and the Academic Development Committee are providing notebooks, pens, pencils and other materials needed from time to time.
She also informed that the Government has never provided uniforms and textbooks for the students in time and as such the committees managed the requirements by procuring them from shops.
Conveying that the students enrolled in the school are mostly from underserved families, Randhoni added that the committees and the teaching staff are planning to roll out more plans which include establishing one pre-nursery room with the facilities of play well systems.
She expressed contentment that two lady teachers from the locality have also stood up for the poor students. They have been providing free tuition to the students of Class X since last year, she said.
She further informed that the school, despite its shortages, has produced a student with letter marks in English and Meitei Mayek besides securing 100 percent pass percentage in the HSLC Examinations held this year.