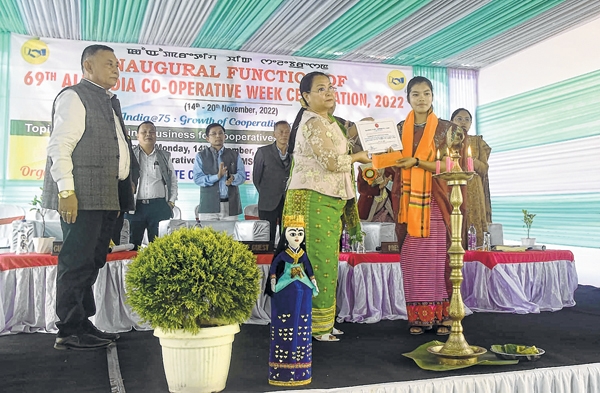 DIPR/OSR
IMPHAL, Nov 14: Manipur Cooperation Minister Nemcha Kipgen today inaugurated the 69th All India Cooperative Week Celebration, 2022 held at Cooperative Complex, Lamphelpat under the theme 'India @75: Growth of Cooperatives and Future Ahead' and topic 'Ease-of-doing Business for Cooperatives, GeM, and Export Promotion'.
The inauguration function was jointly organised by Manipur State Cooperative Union and Registrar Cooperative Societies Manipur.
Speaking as the chief guest, Nemcha Kipgen asserted that an aversion to hardwork coupled with greed for money cannot bring Manipur into the path of development.
In this regard, she pointed out people's habit of taking out loans and failing to repay them. She maintained that this failure on the part of scores of people has damaged the reputation of the State as well as posed a roadblock in the path to development.
Further, the Cooperation Minister made a clarion call to all cooperative societies and stakeholders to strengthen the cooperative movement in Manipur for sustainable development by inculcating the habit of repaying loans.
She advised people to take out loans and spend the money in a sustainable manner asserting this will surely contribute in developing the State.
The Cooperative Minister also highlighted the lack of development in the sector despite today marking the '69th' All India Cooperative Week Celebration.  She stressed that hard work with sheer dedication, integrity and sincerity are the main elements for developing cooperative sectors in the State.
Nemcha Kipgen further informed that computerization for Primary Agricultural Credit Cooperative Societies (PACS) is under process for efficient functioning. She stated that under the supervision of Union Minister for Cooperation Amit Shah, the cooperative sector will witness massive developmental changes.
Dignitaries present at today's event include L Tompishak Singh, Chairman, Manipur State Cooperative Union; P Vaiphei, IAS, Additional Chief Secretary (Cooperation) and Arambam Valentina, IAS, Registrar, Cooperative Societies, Manipur also graced the function as president and guests of Honour respectively.