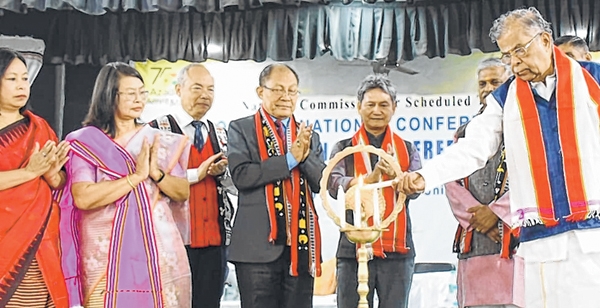 IMPHAL, Nov 14 (DIPR)
Governor La Ganesan has reiterated that the Government is committed to all round development of tribals in the country.
He was speaking as chief guest at the inaugural session of a one day National Conference on Tribal Heroes in India’s Freedom Movement held at the Central Hall of GP Women’s College in Imphal today.
The Governor said that the Government at the Centre and the State are making relentless efforts for improving connectivity in the tribal areas and improving their standard of living since the last many decades.
He said, “The freedom we enjoy today was not attained only by the movement of a handful of people. The brave heroes belonging to the tribal communities contributed significantly to the freedom struggle. We should always remember that numerous tribals who fought the oppressors to attain freedom.”
Remembering the great tribal freedom fighters like Rani Gaidinliu, Birsa Munda etc, La Ganesan said, the history of tribal heroes has been all-encompassing and all-embracing.  Therefore, the youth should be made aware of the life and values of these heroes.
He further said that many of the protests and uprising against the British were led by tribal heroes.
Their fight was for their land and most importantly, their people.
The efforts made by the National Commission of Scheduled Tribes (NCST), New Delhi to organize such an important event as a part of Azadi Ka Amrit Mahotsav is, indeed, commendable and praiseworthy, he added.
The Governor also opened a photo exhibition as a part of the workshop.
Konthang Touthang, joint secretary, NCST; PV Radhakrishna, National coordinator, Akhil Bharatiya Vanvasi Kalyan Ashram; Prof N Rajmuhon, Vice-Chancellor, Dhanamanjuri University; Lt General (Retd) K Himalaya, tribal delegates and students attended the conference.
The conference was organized by the DM University under NCST, New Delhi.