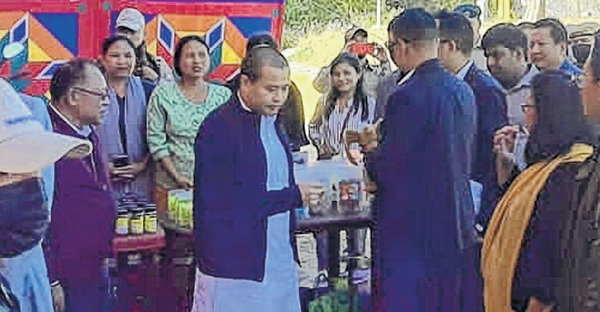 TAMENGLONG, Nov 14
The 7th edition of the Amur Falcon Festival aimed at conservation and promotion of the migratory bird was celebrated at Tamenglong district today.
The festival at Multipurpose Hall, Tamenglong was organised by Tamenglong Forest Division in collaboration with Rain Forest Club Tamenglong, Wildlife Trust of India, Jim Corbett Foundation and Tamenglong Times.
Forest and Environment Minister Th Biswajit, Water Resources Minister Awangbow Newmai and Principal Conservator of Forest Dr AK Joshi attended the festival as chief guest, guest of honour and president of the programme respectively.
Speaking as the chief guest, Th Biswajit Singh thanked the people of Tamenglong for protecting the migratory bird.
He appreciated the initiative taken up by Dailong Village for preserving forest land in Tamenglong district and urged the locals of Chiuluan Village to protect the Amur Falcons as the village has been declared a roosting site for the migratory birds.
Th Biswajit Singh also stated that under the able leadership of Chief Minister N Biren Singh, Manipur is experiencing less bandh, blockade and communal tension. He further said that development can happen only when there is peace in the State.
Awangbow Newmai said people are becoming more and more aware of the importance of protecting wildlife including the Amur Falcon.
He said Amur Falcons were sold in the open market before but now this has stopped as people have become more aware of the importance of protecting the migratory birds.
The Amur Falcons, he said, do not harm or destroy crops. They come here and roost for a while and fly back crossing vast seas and covering thousands of kilometers. “We as custodians, let us continue to protect and preserve this migratory bird. Amur Falcon can be called as the ambassador of peace.”
The programme was attended by many district level officers, leaders of several civil society organisations, Church leaders, NGO leaders, village authority leaders, police and security personnel.
As part of the celebration, a photography and a mobile video competition was also conducted.
Irengbam Momocha Singh, Dr Kiran Kulkarni and Thuikammang Gangmei were adjudged first, second and third position respectively in the photography competition.
In the mobile video competition, Lily Gangmei and James Lalnghanglein were declared first and second respectively.
Notably, the Amur Falcon (Falco amurensis) is the world's longest travelling small raptors of the falcon family.
The Amur Falcons breed in south-eastern Siberia and Northern China before migrating in large flocks across India and over the Arabian Sea to winter in Southern and East Africa.
After migrating from their breeding ground, they reach North East India through China, Laos, Vietnam and Myanmar during October. They stay in North East States of Manipur, Nagaland, Assam, Meghalaya etc from second week to last week of November. Then they migrate and spend the cold winter season in the warm area of South Africa and stay there up-to March, April. They take a yearly travel of about 20,000 kilometers.
Notably, to conserve and study their migratory pattern, Amur Falcons were first tagged with satellite radio in Manipur in 2018. (with inputs from DIO Tamenglong)