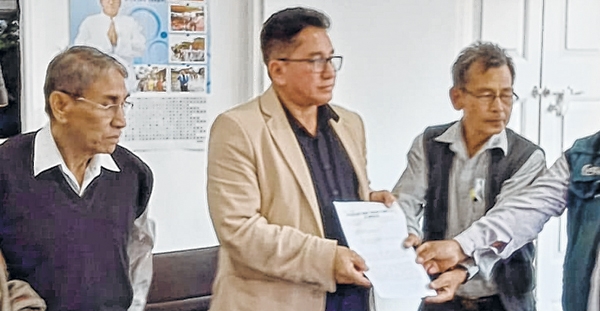 By Our Staff Reporter
IMPHAL, Nov 16 : In a major boost to the STDCM’s campaign for granting recognition to the Meitei/Meetei community as a Scheduled Tribe, two more MLAs have come out in support of the demand.
Teams of STDCM visited Lamsang AC MLA Sorokhaibam Rajen and Wangkhei AC MLA Thangjam Arunkumar at their respective residences today and submitted memoranda urging them to persuade the State Government to send the requisite recommendation and other necessary documents to the Central Government.
Talking with the visiting STDCM team at his Lamsang Salam Keikhu residence, S Rajen pointed out that the hill people and the plain people shared a very close relationship and lived as one before the advent of Hinduism and Christianity.
This bond of fraternity suffered a severe blow following proselytisation of plain people and hill people into Hinduism and Christianity.
After accepting Hinduism and Christianity, the plain people and the hill people adopted separate ways of life, Rajen said.
He maintained there would be no problem in enlisting the Meitei/Meetei in the ST category for self-preservation and it would not harm other communities in any manner.
It would be in the fitness of things for the State Assembly to adopt a resolution and send a recommendation to the Central Government for enlisting Meitei/Meetei in the ST category, Rajen said.
Before taking the matter to the State Assembly, it is necessary to take the opinions of the people and taking people’s opinions would not be any problem provided there is unity of purpose among the Meitei populace and CSOs, he said.
Noting that some people see the movement for ST status as a regressive step, Rajen maintained that enlistment in the ST category does not necessarily mean regression.
Even if the Meitei/Meetei community was enlisted in the ST category, they would be free to follow religious faiths of their own choice, he added.
On the other hand, MLA Thangjam Arunkumar remarked that the STDCM’s movement for granting ST status to the Meitei/Meetei in order to protect the community is quite legitimate and timely.
If the living space or territory of any community is vanishing, the particular community is on the verge of extinction, he said.
It is a foregone conclusion that the influx of non-local people to the State would only multiply once Manipur finds its place on the country’s railway map.
Demanding ST status which is guaranteed by the Constitution in order to protect the community and its homeland is a legitimate one, Arunkumar said.
Saying that there are records of a movement which sought inclusion of Meitei/Meetei in the ST category during the time of Prime Minister Indira Gandhi, Arunkumar maintained that the ongoing movement to secure a Constitutional safeguard for the Meitei community is a positive step and it would not impinge upon the rights of other communities.
“As a legislator, I would pursue the matter at my best level and urge the State Government to send the requisite recommendation”, Arunkumar assured the STDCM team.
STDCM working president L Lokendra said that ATSUM has the right to exercise freedom of speech and expression and raise objections to the demand.
However the Government must invite all the stakeholders either together or separately and convince all the stakeholders that enlistment of Meitei/Meetei in the ST category would not harm any other community, Lokendra said.
Inclusion of Meitei/Meetei in the ST category has no intention to impinge upon the rights of other communities. Rather, it would bring the Meiteis/Meeteis and the hill communities on a level platform and thus ensure peace and  cordiality among all the indigenous communities, the STDCM working president added.