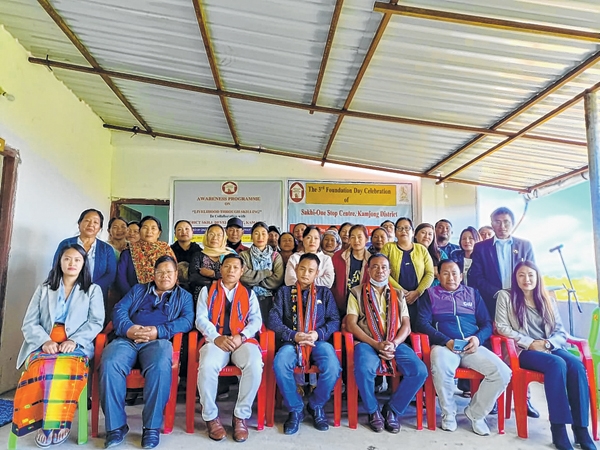 KAMJONG, Nov 16 (DIPR)
The 3rd foundation day of Sakhi-One Stop Centre (OSC), an initiative sponsored by the Ministry of Women and Child Welfare (MWCD), was celebrated today at Leiyatang village, Kamjong Headquarters.
An awareness programme on the topic ‘ Livelihood through Skilling’ was conducted as a part of the celebration in collaboration with the District Skill Committee (DSC), Kamjong.
The event was organized with the support of the Deputy Commissioner, Kamjong Rangnamei Rang Peter.
The function was graced by SDO Kamjong, Lunminthang Haokip as the chief guest; Village Chief of Bungpa Khullen, Hoping Chithung as the guest of honour and OSC Kamjong Central Administrator MK Chanchuila as the president.
Kashing Shingnasui, Mahatma Gandhi National Fellow, Kamjong; SDC Kamjong L Ingocha Singh and representatives of various CSOs of Kamjong district also attended the event.
Speaking at the occasion, SDO Lunminthang highlighted the objective of OSC, a centre for addressing discrimination and violence against women and to help women in distress by providing shelter and assistance. He further stated that the OSC and its staff have been doing exemplary work in extending awareness to the various communities of Kamjong.
Village Chief Hoping Chithung applauded the OSC and the DSC for the collaboration in organizing such a simple yet important programme and for including the awareness programme on skilling. He also stressed on how everyone should try to extract optimum utilization of the myriad opportunities presented to us by the Government.
Mahatma Gandhi National Fellow (MGNF) Kashing, who spoke as a resource person, emphasized on the importance of skilling amongst the youth and the public in general and how it can significantly help in livelihood generation. She also highlighted the various training courses available under schemes like DDU GKY, PMKVY, CIPET, NIELIT and also the opportunity provided to work in Japan post the Japanese Language training partly sponsored by NSDC and overseas through private agencies such as Emporium, for the unemployed and school dropouts of the district.
Today’s event was co-ordinated by the OSC Kamjong with the support of the District Administration and District Skill Committee.