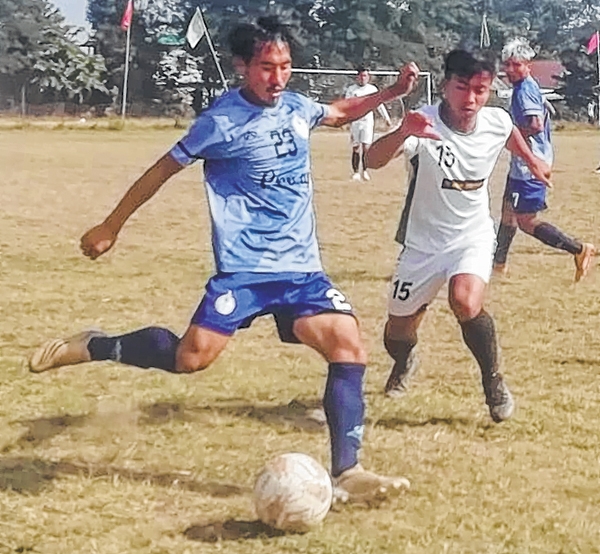 By Our Staff Reporter
IMPHAL, Nov 16 : Young Physique's Union (YPHU) and The Athletic Football Club (AFC) emerged victorious in today's Group A matches of the ongoing 15th Manipur State League at Artificial Turf Ground, Lamlong Thongkhong as NACO stunned NEROCA FC (reserves) 3-1 in a Group A match.
In the first Group A match staged this morning, YPHU beat Rising Athletic Union (RAU) 2-0 thanks to a goal each from Lunkhongam Haokip (11') and Lungouhao Hangshing (81').
Later in the Group B match, Ngangom Peter hit a brace to ensure NACO beat NEROCA FC 3-1 for the third win in 7 matches.
Ngangom Peter opened the scoring right before the break (45') before scoring his second in the 56th minute. Laishram Binoy then gave NACO the three goal cushion scoring the team's third in the 64th minute.
NEROCA FC found the face saving goal through Maibam Deny one minutes into the stoppage time (90+1').
Later in the second Group A match, KLASA slumped to their third loss in 8 matches going down by 0-2 goals to AFC-Thoubal.
Loyangamba Meitei opened the scoring in the 27th minute converting a fine freekick from outside the box before Sahidur Rahaman connected a cross from the right flank to stun the KLASA keeper the very next minute.
KLASA toiled hard to reduce the gap in the remainder of the game but AFC defence kept all threats at bay to secure all three points for the fourth time in 8 matches.