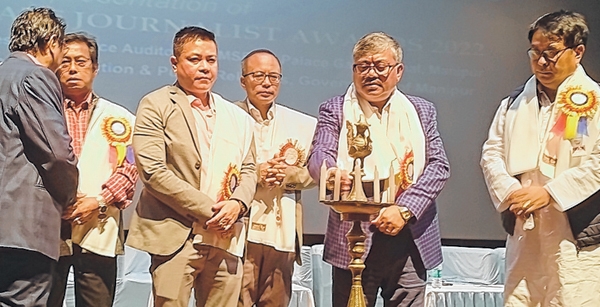 Imphal, Nov 16 (DIPR)
National Press Day 2022 was observed at Palace Auditorium, MSFDS, Palace Gate, Imphal today under the aegis of the Department of Information & Public Relations.
A seminar on “Media’s Role in Nation Building” was also held as part of the observance. Salam Bharat Bhusan, veteran journalist and former Editor, Huiyen Lanpao daily was the moderator of the seminar. K Sarojkumar Sharma, Senior Journalist and Peter Adani, Editor, Hills Hornbill Express were the resource persons.
As a part of the observance, Manipur State Journalists Award were conferred on media persons of the State working in different fields.
Speaking on the occasion, Works/YAS Minister Govindas Konthoujam said that the media has been playing a big role in Nation building.
He said that the credibility of media houses has been lowered due to the trend of paid news and intrusion by social media. There is a need for monitoring from both the Government and media houses for transparent functioning of the media fraternity, he added.
Despite the cases of assault and mishandling of journalists, the spirit of journalists has not been dampened, Govindas said.
He added that the Government is committed to the welfare of the people of the State which includes the media fraternity.
Media persons should work with determination and dedication for the welfare of the society, he added.
IPR Minister Dr Sapam Ranjan Singh underscored the need to verify the authenticity of new reports before they are published.
He said the speed of disseminating news is becoming faster because of the evolving technology.
“Negative news outnumbers positive news in the State and it has a serious impact on the common people. We need to change this trend”, Dr Sapam Ranjan said.
Fishery Minister H Dingo Singh said that the media plays a big role in the welfare of the State.
Acknowledging the dedication of the media fraternity, Dingo said that he would raise the grievances of the media persons to the Government.
It may be worth mentioning that National Press Day is observed every year all over the country on November 16. This was the day on which the Press Council of India was set up as a moral watchdog to ensure that the high standards expected from this powerful medium are maintained.
The observance was attended by  AMWJU president Wangkhemcha Shamjai, EGM president Khogendra Khomdram, and MHJU president Peter Adani as guests of honour.
Eminent media persons of the State, officials and staffs of Information and Public Relations, students of Journalism and Mass Communication, Manipur University and State Institute of Journalism, DIPR also attended the observance, among others.
The Manipur State Journalists Awards were also distributed at the gathering. The awards are; Ningombam Hemantakumar, Editor, Sanaleibak Daily, Best Editor on National Integration & Communal Harmony, Moirangthem Khagemba Meetei, Robinson Wahengbam, Taorem Bishwajit Singh, Maibam Kenedy Singh, Rabi Takhellambam, all from Sanaleibak Daily and Khumukcham Joychand Singh of Hueiyen Lanpao.