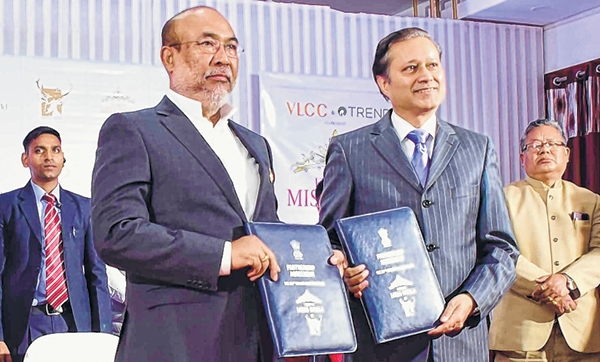 IMPHAL, Nov 17 (DIPR)
For the first time in the entire North East India, Imphal would host the grand finale of Femina Miss India in April 2023.
A Memorandum of Understanding (MoU) was signed today between the Department of Tourism, Government of Manipur and the Times Group to hold the grand finale of Femina Miss India 2023 in Manipur.
The MoU was signed by Director, Tourism W Ibohal Singh on behalf of Manipur Government and Chief Operating Officer, Miss India Organization Rohit Gopakumar on behalf of the Times Group in presence of Chief Minister N Biren Singh and Managing Director, The Times of India Vineet Jain.
Speaking at the occasion, Chief Minister N Biren expressed happiness on signing the MoU to host the grand finale of the 59th Edition of Femina Miss India 2023 in Manipur in April next year.
The main purpose of the partnership is to celebrate the diverse and inclusive Indian culture and to inspire and empower local youth by welcoming the best of India’s talents to the State. The State can also showcase its rich cultural heritage, he said.
Stating that the prestigious event would be held for the first time in North East India, he maintained that hosting such an event reflects the growing interest of investors in the North East, specially Manipur.
It also shows the growing confidence in the security scenario and opportunity for investment in the State, he continued.
The Chief Minister expressed hope that the tourist footfall will recover to the pre-Covid pandemic level soon with the upcoming Manipur Sangai Festival to be held from 21st to 30th November.
Biren mentioned that Prime Minister Narendra Modi had been urging people of the country to visit the North Eastern States adding that the State had also been trying to attract domestic travellers in the last few years.
He informed the gathering that Manipur has over 34 recognized tribes and the State offers most interesting customs and traditions which are reflected in the State’s varied cultural practices, clothing, cuisine and interesting crafts.
The Chief Minister also mentioned the scenic beauty of different places of tourist attractions in the State which are not found in other parts of the world.
Biren further expressed his belief that the State would be able to attract business from different parts of India and the world by introducing its varied tourism attractions and products, through the Femina Miss India 2023 event.
He thanked the organizers of the event for considering Manipur as the host State for the event. He also expressed hope that the event would be a new chapter for tourism business in the State.
Managing Director, The Times of India Vineet Jain thanked the Chief Minister for the historic partnership to host the prestigious Miss India 2023 grand finale in Imphal.
He said that Manipur is blessed with a history of over 2500 years and added that the Times Group was privileged to host the event in the State. He said that Manipur is one of the leading States in terms of gender equality and women empowerment and added that the State had given the country a powerhouse of women in sports.
He continued that the grand finale of the 59th edition of Femina Miss India would be a historic event as this would be the first time to be held in North East India.
The Chief Minister maintained that the endeavour of the Miss India Organization is to capture the essence of the State as the backdrop to the finale. The association would complement the objective of inclusivity and diversity and Manipur’s objective of reaching out to the Nation as a destination of culture and beauty, he added.
MAHUD Minister Yumnam Khemchand, Works Minister Govindas Konthoujam, Water Resources Minister Awangbow Newmai, Health and Family Welfare Minister Dr Sapam Ranjan, Consumer Affairs, Food and Public Distribution Minister Leishangthem Susindro Meitei, Social Welfare Minister Heikham Dingo, Education Minister Thounaojam Basanta Kumar, Rajya Sabha Member Maharaja Leishemba Sanajaoba, Chairman, Tourism Corporation of Manipur Limited Karam Shyam, MLA of Mao AC Losii Dikho, Chief Secretary Dr Rajesh Kumar, other officials of State Government and Times Group also attended the programme.