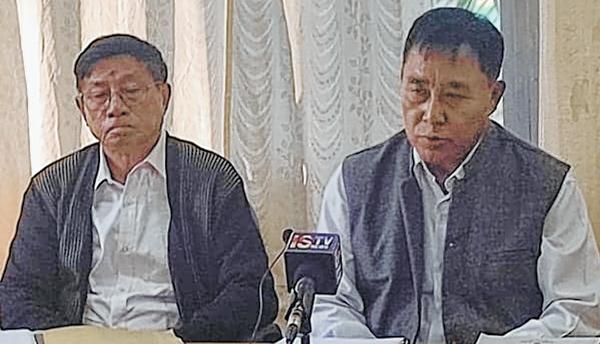 By Our Staff Reporter
IMPHAL, Nov 5 : Manipur Olympic Association general secretary, Sunil Elangbam has expressed strong belief that Manipur will successfully collect more than 100 medals and defend the overall champions title at the second edition of North East Olympic Games to be hosted in Shillong by Meghalaya State Olympic Association.
Sunil was speaking to media persons in a media event held this evening at Manipur Olympic Association's office ahead of the zonal games which will feature 18 sports disciplines.
A strong 460- member State contingent including officials will be representing Manipur in the Games. The media programme was also attended by State contingent's Chef de Mission, M Rajendra Singh besides other key functionaries of Manipur Olympic Association.
Manipur men's and women's football teams have left Imphal yesterday and today respectively, said Sunil while adding that remaining athletes will leave Imphal for Shillong on November 8.
Maintaining that State athletes will compete in all the 18 disciplines for the 254 medals, he said that Manipur is expecting a big finish in the games all thanks to the support of the State Government, department concerned and sports bodies in the State.
Saying that Manipur Olympic Association is making diligent efforts in furthering the cause of games and sports and upholding the idea of unity and oneness, he also appealed to all sections of the society to contribute towards the cause and ensure smooth passage of the State contingent.
On organisations which are embroiled in factional crisis, he said that efforts are being made to resolve all the issues at the earliest and sought support from all to help games and sports scale new heights.
Except for football, the competition will begin from November 10 onwards.