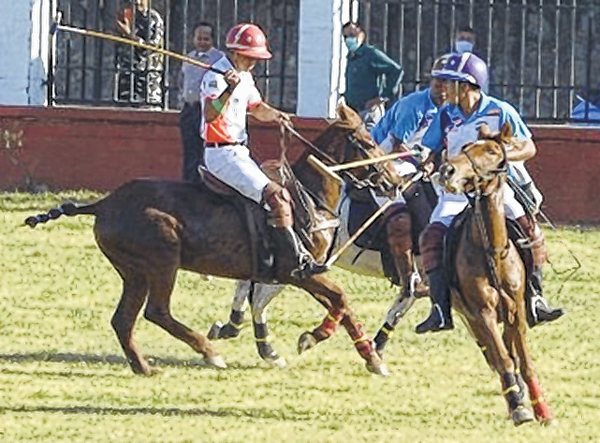 By Our Staff Reporter
IMPHAL, Nov 8 : Imphal Riding Club-A, Lamphel and Tekcham Polo Club will face off against one another in a semi-final clash of the 36th N Hazari and Dr N Tombi State Polo Tournament being organised by Manipur Horse Riding and Polo Association at Mapal Kangjeibung.
In the third quarter final match of the tournament, Imphal Riding Club-A carved out a 7-5 win over Assam Rifles Polo Team-Keithelmani to seal a semi-final berth.
Riyakat Ali scored four goals for the AR team but his effort went in vain as IRC-A staged a comeback riding on A Basanta's treble and two goals from Leishemba Takehllembam.
AR Polo team were leading 1-0 till the first chukker with Riyakat Ali goal who also went on to score three more goals but IRC pulled level in the second chukker adding three goals, two by Basanta and one by Dollar Soram.
Basanta, Leishemba and L Rohit scored a goal each for IRC-A in the third chukker which saw AR team draw blank. Despite Riyakat Ali's double in the final chukker, IRC-A sealed a 7-5 win with another goal coming from the mallet of Leishemba.
In the last quarter final match, Tekcham Polo Club eked out a 5-4 win over Manipur Sports Police Club (MPSC)-B.
T Pradeepkumar and H Abung Khuman scored two goals each for MPSC-B as S Sadananda shone with a treble for the Tekcham side. Pradeepkumar gave MPSC-B a 1-0 first chukker lead which was cancelled by M Doren in the second chukker.
S Sadananda overturned the lead with the only goal in the third chukker before the two sides netted three goals each in the final chukker. H Abung scored two of his two goals in the final chukker and Pradeepkumar scored his second for MPSC-B as S Sadananda scored two of his three goals and M Doren found his second.