The Jarawas of Andamans 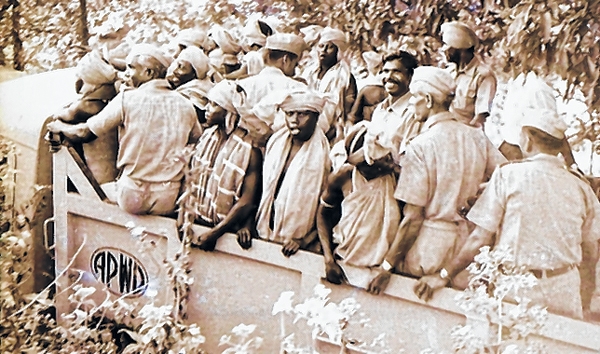 S Balakrishnan
That was the first time I was intruding into the Jarawa tribal territory in the Andaman Islands along with a convoy of vehicles. We were travelling from Port Blair in South Andaman to places in Middle Andaman Island on the Great Andaman Trunk Road (also called NH4) in 2009; this highway cuts through the land of the aboriginal Jarawas. Hence I would have preferred the creek route that I enjoyed in 1979 but no sailing was available in 2009.  As the government bus chugged through the Jarawa reserve area, I first caught sight of a Jarawa youth; he stood aside on the road side for the bus to move ahead, slightly bent with a basket load of forest produce. He resembled an ebony statue, shining black with youthful vigour. He slightly raised his bent head and glanced at the convoy; what an intense pair of eyes! I still remember him. Ignoring the tribal youth and their rights, the convoy just moved ahead but was soon reprimanded by two Jarawa groups that attacked the vehicles with sticks and stones. I felt they had the right to express their resentment, especially because our bus driver was so rash. But who cares! Neither the colonial British who established the penal settlement cared for the tribes nor did the democratic Indian government which laid the trunk road through their land and is expanding it.
As the bus moved ahead, a group of Jarawa people – women and boys – boarded the bus. I felt lucky to hear the women happily sing in their language. Suddenly these two women shouted “roko, roko” in Hindi (stop, stop) and, as the bus screeched to a sudden halt, they all jumped down to be greeted by their own folk. They all disappeared into their beautiful forest, their home for thousands of years. After a few days as we were returning, we again met a few Jarawa people with one woman carrying her baby who seemed to be sick. The women, it seemed, were comfortable in nighties.
I first met the Jarawa youth in 1979; a friendly group of Jarawa youth had been brought to Port Blair to show off the administration's efforts in making friends with them. They were put up at Adi Basera in Port Blair, the guest house for the tribal people; I caught sight of them as they were being taken to the Chief Commissioner’s bungalow to be paraded before him. This was not a logical decision, but back in 1979 awareness among even the officials concerned was less. I remember the Sikh police chief of the islands, a portly man, who used to socialize with the tribals, and the Anthropological Survey of India local chief TN Pandit who was the lord of the tribals of the Islands! This event was the talk of the little town of Port Blair back in 1979.
It is presumed that there are two groups of Jarawas, one that mingles with the so-called civilized people and the other group that does not support this view.  They must have seen their own people being decimated because of contacts with outsiders. Once living in thousands in South and Middle Anaman islands, these aborigine Jarawas are now feared to be just around 400, with their habitat shrinking daily. The other three aborigine tribes of Andamans are the Great Andamanese, the Sentinelese and the Onges. Let these tribes thrive!
The writer can be reached at [email protected]