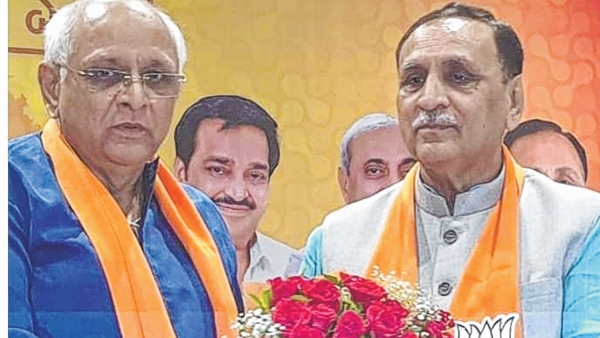 Shimla, Dec 10
The Congress's Sukhvinder Singh Sukhu, who headed the party's campaign committee in Himachal Pradesh, has been appointed the next Chief Minister. Mr Sukhu, 58, is an MLA from Nadaun in Hamirpur district. He will take oath tomorrow at 11 am.
Five-time MLA Mukesh Agnihotri will be the Deputy Chief Minister.
"Deputy Chief Minister designate Mukesh Agnihotri and I will work as a team. I started my political career at the age of 17 years. I will never be able to forget what the Congress party has done for me," Mr Sukhu told reporters, according to news agency ANI.
Mr Sukhu, a former president of the Himachal Pradesh Congress, is also a four-time MLA and is considered close to party leader Rahul Gandhi.
He, however, did not have a smooth working relationship with six-time Chief Minister Virbhadra Singh, who died in July last year.
"A matter of pride that the son of an ordinary family will be our CM, thanks to our leadership, Sonia Gandhi, Mallikarjun Kharge ji, Rahul Gandhi and Priyanka Gandhi for leading a spirited campaign. My good wishes and support to my new CM Sukhu," Congress leader Anand Sharma tweeted.
Earlier, State Congress chief Pratibha Singh, the wife of Virbhadra Singh, and Mukesh Agnihotri had been angling for the Chief Minister's post.
"We accept the decision taken by the Congress high command," Pratibha Singh told reporters this evening.
Vastly different in origin from the ex-royal Virbhadra Singh, Mr Sukhu, as an activist at Himachal Pradesh University in Shimla, led the National Students' Union of India's State unit in the late 1980s.
Earlier this evening, after it came to be known that Pratibha Singh will not be the Chief Minister, her supporters protested at the hotel where the party's central observers were staying. They stopped the car of Chhattisgarh Chief Minister Bhupesh Baghel, one of the central observers, yesterday before the party's crucial meeting and asserted their support for Pratibha Singh.
Pratibha Singh had staked her claim to the job with a sharp reminder for the leadership in Delhi. She said the elections were fought and won in the name of Vir-bhadra Singh and it would be "a disaster" to sideline his family.
But she doesn't have popular support among the party's newly-elected 40 MLAs, which is why she has been dropped from the contest, sources said.
In a meeting of the Congress high command on Friday, MLAs had allowed the party president to pick the legislature party leader, who will also be the next Chief Minister.
The Congress came to power after defeating the BJP in the assembly election by winning 40 of the 68 assembly seats.
On the other hand, Bhupendra Patel will continue as Gujarat Chief Minister for a second term after he was elected legislative party leader in a meeting of BJP MLAs on Saturday.
This comes after Patel, along with his entire Cabinet, tendered their resignation on Friday to pave the way for the formation of a new Government in the State after the ruling BJP’s landslide victory in the Assembly elections. Patel will be sworn in on December 12, and the oath-taking ceremony will take place at 2 pm on Monday in the presence of Prime Minister Narendra Modi and Union Home Minister Amit Shah.
With Gujarat voting the BJP back for the seventh straight time, this election has made history in the State. The key takeaways of the 2022 election are the formidable, undiminished sway PM Modi holds over his home State; the readiness of a section of the voters to accept an “outsider,” and the rejection of the fatigued Congress. Although the AAP could not put up a great show in the State, the glimmer for the party was the 12.9-per cent vote share, five seats in the House — and that it had emerged as a National party.