Nupilan and its impact in Manipuri society 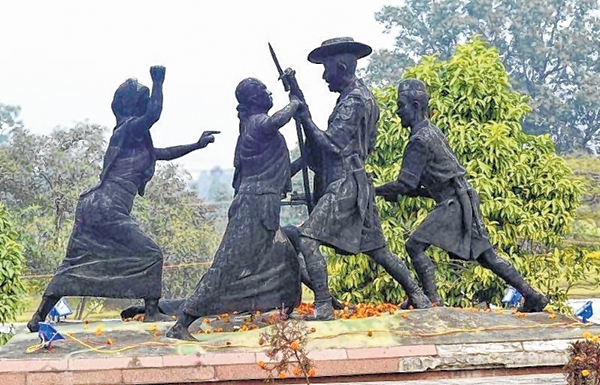 Milan Luwang
Contd from prev issue
The women came to the office of Manipur state darbar requesting not to sell rice to the mill owners and export rice to outside Manipur. The members of darbar replied to come the next day. On 12 December, many hundreds of women spontaneously gathered at khwairamband keithel and shut down khwairamband. The crowd marched to the Manipur state darbar. They requested the president of darbar T A Sharp not to export rice outside. In his reply, the president said that he could not order without the permission of Maharaj who stayed in Nabadwip. The crowd urged the president to send a telegram immediately. Sharp moved with the women to the telegraph office by foot and sent a message to the Maharaj. At that time, more than 3000 women gathered at the telegraph office. The crowd cordoned president Sharp till the reply from Maharaj was met. Around 2:30 pm a platoon of 4 Assam rifles reached there. After warning, the sepoys had stormed the unarmed women. The women were severely lathicharged and swept away from the campus of the telegraph office. At least 20 women were injured in the incident, 5 were critical. They were hospitalized. Some proactive women confronted the sepoys. Thus the second Nupilal 1939 broke out with blood shed. Next day,thousands of high tension women gathered at khwairamband keithel and completely shut down khwairamband. Shabi ,Tongou, Chaobiton, Leibaklei, Khongnang,etc were the worth mentioning leaders who spearheaded the movement. The women demanded the political agent to hand over Babu Kasturchand because he allegedly expressed that all the rice should be collected , then the Manipuris have to eat paddy cover. Later Kasturchand sent a letter to the women folks mentioning that he was so sorry and to forgive him.Then the women folks cool down.In the evening of 13 December,political agent C Gimson came to the khwairamband and met the women folks.He told that the Maharaj agreed to ban export of rice to outside Manipur with immediate effect. A telegram was sent in this regard, he reiterated.On December 13 14 , all the rice mills in Manipur were shut down by the women folks. The agitation continued for some days. At last the government officially  announced that both export of rice to outside Manipur and use of rice mills had been banned with immediate effect. Thus the agitation of women folks concluded with great success.Normalcy was restored.This movement of women folks is still known as second Nupilal 1939 .
• Historians opine that the Nupilal movement contributed much to the making of Manipur.It sowed the seeds of economic and political reforms.It was a turning point to the political lives of leaders like Jana Neta Hijam Erabot whose major focus had been social reforms.
• We can notice from the two Nupilal movements that the valour of Manipuri women folks is extraordinary as compared with other countries. Two Nupilals gave impacts to our society. Today’s women folk follow the track made by the women who participated in the Nupilal. The emergence of Meira paibi and Nisha bandhi will be the impact of Nupilal. The women folks take proactive roles in stopping drugs and other intoxicants. The women agitate against the imposition of the draconian law, the AFSPA in the state. The agitation is still ongoing. Irom Sharmila had agitated for about 15 years demanding repeal of AFSPA by fasting unto death. As a result, the authority has removed disturbed area status from seven assembly segments of Imphal area. Besides, women played an important role in the inclusion of Manipuri language in the 8 th schedule of the Indian Constitution. As a sign of condemnation to the oppression of Assam rifles, 12 mothers in naked positions agitated at the western gate of Kangla on 11 July 2004 . They challenged the Assam rifles. Consequently, the Assam rifles were removed from Kangla. The women took proactive roles in demanding the implementation of ILP in Manipur. The aforementioned agitations launched by the women folks of Manipur are the impacts and pursuance of Nupilal.
The writer is a senior journalist and can be reached at [email protected]