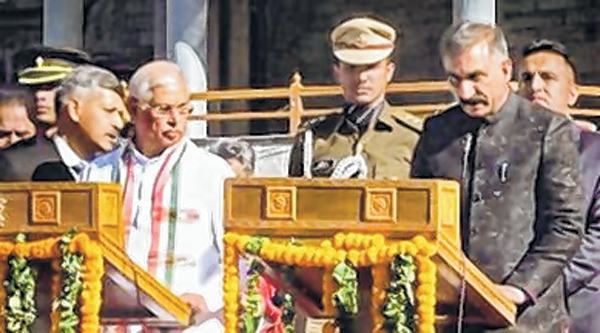 SHIMLA, Dec 11
Risen from the ranks with no political dynasty, but having wide organisational expe-rience, four-time Congress legislator Sukhvinder Singh Sukhu, 58, who throughout his political career was not on the same page with the party's tallest leader Virbhadra Singh, took oath of office on Sunday as the 15th Chief Minister of Himachal Pradesh amidst huge crowd.
Four-time legislator Mukesh Agnihotri, 60, took the oath of office as the Deputy Chief Minister at a ceremony that lasted less than 10 minutes. Both took the oath in Hindi.
The swearing-in ceremony was held at the historic Ridge here, which was delayed by 20 minutes from the scheduled time at 1.30 pm. It was attended, among others, by party's National president Mallikarjun Kharge, Chief Ministers Ashok Gehlot and Bhupesh Baghel, Rahul Gandhi, Priyanka Gandhi Vadra, former Union Ministers Anand Sharma and Pawan Bansal, besides Congress in-charge for Himachal Pradesh Rajeev Shukla and former Haryana Chief Minister Bhupinder Hooda.
Governor Rajendra Vishwanath Arlekar administered the oath of office and secrecy to them. This will be Sukhu's maiden term as the Chief Minister.
Cabinet expansion will be undertaken later.
Belonging to a humble background, Sukhu is the son of a state-run public transport bus driver.
As Sukhu introduced his elderly mother with Rahul Gandhi at the podium ahead of the swearing-in ceremony, Rahul Gandhi, as a goodwill gesture, asked her to have a seat near to him.
Rahul Gandhi, who was donning a half sleeve T-shirt, also greeted State party chief and Member of Parliament Pratibha Singh at the podium with folded hands and warmth.
After being elected unanimously by the party's 40 legislators as the Chief Minister on Saturday evening, Sukhu thanked the Gandhi family for giving him this opportunity.
"I am happy that I am going to be the Chief Minister despite being from an ordinary family. I am thankful to the Congress party and the Gandhi family for giving me this opportunity. My mother never stopped me from being in politics. I have reached here today because of her blessings," he said.
He said his Govt will bring change.
"We will work for the development of Himachal Pradesh," Sukhu, who started his political career at the age of 18, told the media in his first statement after being named the new Chief Minister.
In his initial years of his career, Sukhu was running a milk counter in Shimla. He was the general secretary of the State unit of the Congress-affiliated National Students' Union of India (NSUI) and later became the president of the student body.
He did his MA and LLB from Himachal Pradesh University here and was twice elected as the councillor of the Shimla Municipal Corporation.
Responding to Sukhu's appointment, former Union Minister Anand Sharma said it was a matter of pride that the son of an ordinary family will be "our CM. Thanks to our leadership, Sonia Gandhi, Mallikarjun Kharge, Rahul Gandhi and Priyanka Gandhi for leading a spirited campaign".
Accepting the party leadership's decision, state unit chief Pratibha Singh, who was the frontrunner for the top job, said: "We accept the decision of the high command."
Pratibha Singh is the wife of six-time chief minister Late Virbhadra Singh, while Sukhu is a four-time MLA from Nandaun, who is a known rival of her husband.
Born on March 27, 1964, Sukhu has never ever been a minister or Chief Parliamentary Secretary and a Chairman of a board or corporation in his political career.
Journalist-turned-politician Mukesh Agnihotri, 60, is the Deputy Chief Minister designate. He retained his stronghold Haroli in Una district, the seat he earlier represented thrice -- 2007, 2012 and 2017.
The Congress on December 8 got an absolute majority in the Assembly elections, winning 40 seats -- six over than the half-way mark of 34 in the 68-member House, while the outgoing BJP was reduced to 25. IANS