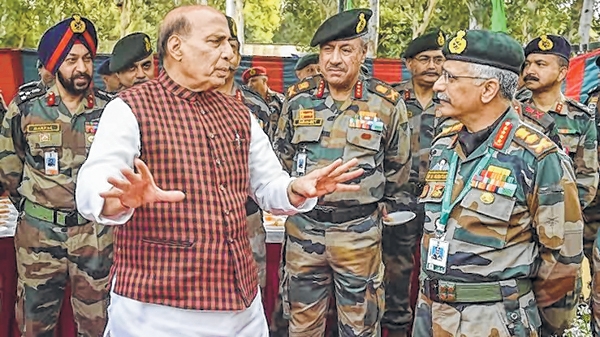 New Delhi, Dec 13
Chief of Defence Staff General Anil Chauhan, Services Chiefs, on Tuesday, met with Defence Minister Rajnath Singh on the security situation along the Line of Actual Control with China at his residence in Delhi. The crucial meeting came nearly three days following a clash between Indian and Chinese troops in the Tawang sector of Arunachal Pradesh.
According to the latest development, Singh, while speaking in the Parliament, said there were no Indian soldiers killed or severely injured in the clash. Furthermore, he assured the House that not a single inch of land was encroached on in Aru-nachal Pradesh and added the "Indian Army is capable to defend its sovereignty and territorial integrity".
"On December 9, PLA troops contacted the LAC in Tawang Sector which was contested by own (Indian) troops in a firm and resolute manner. This face-off led to minor injuries to few personnel from both sides," the Indian Army said in a statement.
"Both sides immediately disengaged from the area. As a follow up of the incident, own (Indian) comman- der in the area held a flag meeting with his counterpart to discuss the issue in accordance with structured mechanisms to restore peace and tranquillity," it said.
‘Much more’ injures on PLA side, says Arunachal MP Tapir Gao
Ruling Bharatiya Janta Party (BJP) MP from Arunachal-East, Tapir Gao on Monday said he heard that some injuries were reported on the Indian side but China’s People's Liberation Army (PLA) suffered much more.
"...I heard that a few injuries were reported on the Indian side but PLA suffered much more injuries...Indian soldiers at the border won't budge even an inch...The incident is condemnable..," news agency ANI reported quoting Tapir Gao as saying.
The Defence Minister is also likely to meet the Prime Minister and other senior Cabinet colleagues to fine-tune the political response to the Opposition's offensive on the issue.
The December 9 face-off led to "minor injuries to a few personnel from both sides" and the two sides "immediately disengaged from the area", an Army statement said yesterday.
Soon after the news spread, the Congress hit out at the Centre, saying that the Government needs to take the Nation into confidence by discussing the issue in Parliament. The Trinamool Congress has submitted a notice in Rajya Sabha, seeking a discussion on the issue.
Government sources have said the Centre has "never dithered from any discussion and is prepared with facts".
Since the deadly hand-to-hand battle in 2020, both sides have sent thousands of troops to bolster the border. Multiple rounds of talks have failed to substantially ease tensions. The army source said there was another "face-off" between Indian and Chinese troops in the last week of November in the Demchok region of Ladakh, further to the north.
It was unclear if there were any injuries resulting from that incident, which was the first since September 2020. The army source said that there has been increased activity in Ladakh by the Chinese military, as well as a "possible" airspace violation by the Chinese air force in the area.
This follows joint military exercises which irked Beijing last month between India and the United States in the northern Indian state of Uttarakhand, which borders China. The Chinese soldiers also displayed a banner objecting to the Indo-US military exercises, the source said.
Undefined border
China and India fought a war in 1962 over their long and disputed border. The exact path of the border, some of which is more than 4,000 metres (13,100 feet) above sea level, has never been demarcated.
Winter temperatures can plunge below minus 30 Celsius (minus 22 Fahrenheit), cracking gun barrels and seizing up machinery.
Even before the June 2020 clash, India was moving strategically closer to the West, deepening security cooperation with the United States, Japan and Australia in the Asia-Pacific region.
United by their concern about China's increasing influence in the region, together they make up the so-called Quad alliance.
India has also embarked on a $130-billion modernisation of its armed forces -- including ordering attack helicopters from the United States and a missile defence system from Russia.
In the aftermath of the 2020 clash, India banned hundreds of mobile applications of Chinese origin, including the popular social media platform TikTok. Chinese firms operating in India, including cellphone makers Xiaomi and Huawei, have been raided by the tax authorities.
Bilateral trade remains brisk, however, at around $100  billion per year, but India imports from China far more than it exports there. Agencies