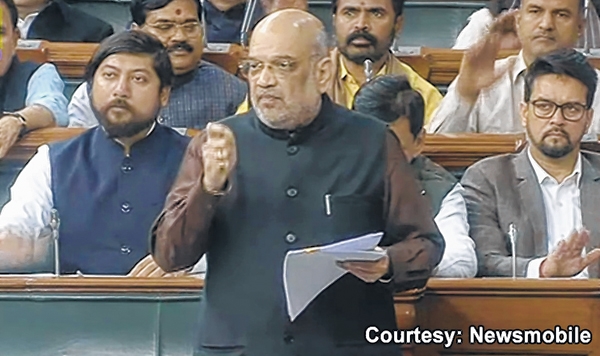 New Delhi, Dec 21
Union Home Minister Amit Shah said in Parliament today that the drug menace is a serious problem which is destroying generations and the profits being made from drugs are utilised for terrorism as well.
The Union Home Minister Amit Shah was replying to the debate in Lok Sabha under rule 193 on the "Problem of drug abuse in the country and steps taken by the Government."
He said that Narcotics Control Bureau (NCB) can conduct probes across the country. "NCB is ready to help each and every State if there's a need to do an inter-State probe. Even the NIA can help the States if the probe needs to be conducted outside the country," he added.
Shah also reiterated the Centre's zero-tolerance policy against drug abuse. "Our Govt policy is very clear: those consuming drugs are victims. We should be sensitive towards them and give victims a conducive atmosphere for their rehabilitation. But those involved in drug trafficking should not be spared," he said.
Shah urged the States and Union Territories to work in synergy against the drug menace. "All the States and UTs have to together fight against the drug menace. We need to stop the entry of drugs through borders, ports and airports. The Revenue Department, NCB and anti-narcotics agencies have to work against the menace being on the same page," he said.
"Our Govt has a zero-tolerance policy towards the issue of drugs. Those countries promoting terrorism in our country are using the profits from drugs for the same. The presence of this dirty money also gradually makes our economy hollow," he added.
"We have mapped the drug network across the States. No matter how big the criminal is, in the next two years there'll be a situation that they'll be behind bars," he said.  ANI