A reflection on Pabung Syam Sharma 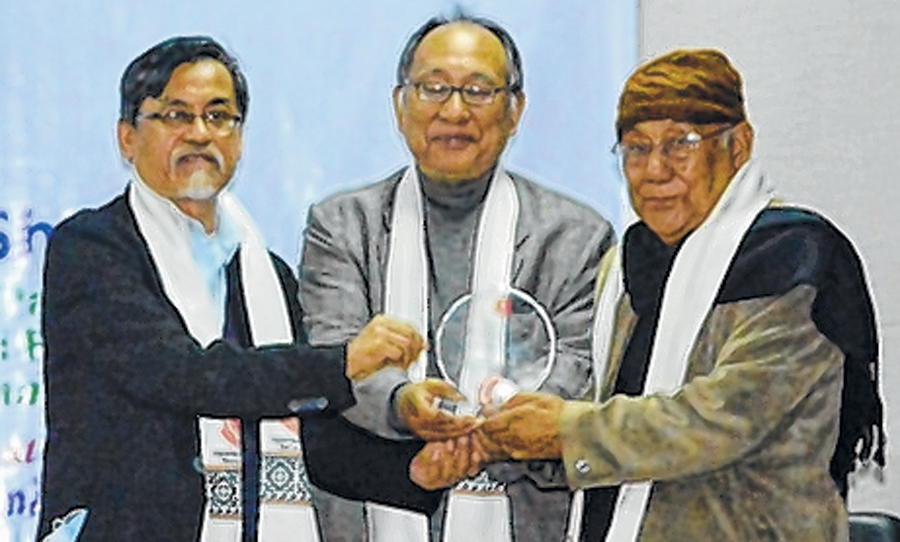 The Department of Sociology, Manipur University organised a reception and facilitation programme in honour of “Aribam Syam Sharma, The Doyen of Manipur Cinema”, on 16th December 2022. On that day, Haobam Paban Kumar's National award-winning biographic film "Pabung Syam", and also Pabung Syam's film "Ashangba Nongjabi" were shown to the students and research scholars. Pabung also delivered an ever memorable speech on such a rare occasion. He inculcated the knowledge of cultural heritage and wanted us to know our identity, and therefore, asserted by asking ourselves to find out who we are, what our cultural heritage is and its significances to our present set-up of society, which is very important and essential among the youth.
Though we are living in a very small area with less population, there is a very rich culture and identity which are perhaps not found anywhere in the world. In the study of each of the items of our language, dances, dresses, food habits, religions, rituals, ecology and environment, sports etc. there has been accumulated and hidden knowledge, hidden truth and hidden facts which are practicable in day-to-day life.
And again, the process of sustainable development is already in practice in society. He revealed the secrecy of the implicit beauty of women with a Nachom and it makes her beauty natural as well as original. The Nachom adds the superb prettiness of the natural beauty of a woman. There has been meaning, logic and uniqueness behind every traditional use of Nachom on different occasions.
The keeping of the attractiveness of Nachom on the side lines of beauty is unfortunate and it is lack of understanding of uniqueness and aesthetic value of Nachom. In the modern and western-influenced society, we are neglecting the value of Nachom while we minutely study and discuss more about the beauty prevailing outside our cultural identity. Is it not shameful for us ?
Pabung disclosed that the language used in the film Shaphabee was in the pure Manipuri language. The film not only depicts the legendary story but also enlightens with full of culture and identity. The same is with the Ishanau film. The Ishanau film is based on the story of a typical Maibi/Amaibi.
The characteristics of an Amaibi which science does not explain, and its relationship with her family and society are shown clearly in the movie. The Amaibi has a respectable status in society in terms of performing various ritual, cultural and traditional ceremonies. The well popular song "Anauba yugki anouba asha puduna laklo naharol semlashi anauba sangshar -"the basic meaning and idea of which is to call the youth of the existing modern society to arise with new hope of the new epoch and to go towards the good direction to uplift and create a new good society with a deep sense of patriotismmarks a turning point.
The song gives new hope and strength to the youth as they are the pillars of the Nation. It would be necessary to study Pabung's movies, documentary films, songs, dramas etc. within the value and its interlinkage with our culture and identity. In the early days, our relationship between father, mother, grandfather and grandmother was strong, smooth and well disciplined which was learnt in the family itself. Therefore, every member of the family and society has their respective responsibilities. Such obligation of every member of the family is clearly seen in Pabung's movies. The relationship between grandson and grandfather, the responsibilities and the role of mother etc. are vividly depicted in the " Imagi Ningthem". The traditions of funga wari, folk song, food habits, traditional games, dance, ritual etc. are all automatically learnt from our forefathers and passed from generation to generation. But, now it is a question whether the tradition is still existing in its full spirit ? We have, however, seen this tradition in Pabung’s movies. It is also a question whether the movies shall remain as movies just for screening? It is fortunate that the films will remain for all of us and will always shine in the realm of our knowledge. From the above backdrops, it is of the view that the films should also be analysed academically to understand the value and beauty incorporated in the films. It has a wide scope for scholars and students to study the value of films and exhibit the beauty and meaning associated with various aspects of knowledge and ideas.
In the present society of the internet and mobile, entertainment programmes occupy a very large portion of daily life, especially among youths. The idea of modernization and the impact of entertainment appear to have a negative image on culture and identity of our society. If the situation remains to continue, an illusory situation may come as imagined in the poem Anauba Thunglaba Jiba of Thangjam Ibobishak.
Though the programme was very short it was concise and full of knowledge, enlightenment and encouragement. It is known that there are many more ideas and knowledge which we may learn from Pabung. It may be of the view that academic discussion and seminars on him and his contributions in the area of arts and culture can fruitfully be conducted if his active participation and personal interaction is possible.
It is very fortunate to invite such a resourceful and high profileicon to the University under the initiative of Professor Kshetri Rajendra Singh, Head of Department of Sociology, Manipur University. It is expected that more such events will be arranged in educational institutions and other cultural organisations.
The writer is a PhD Scholar, Manipur University. Id: [email protected]