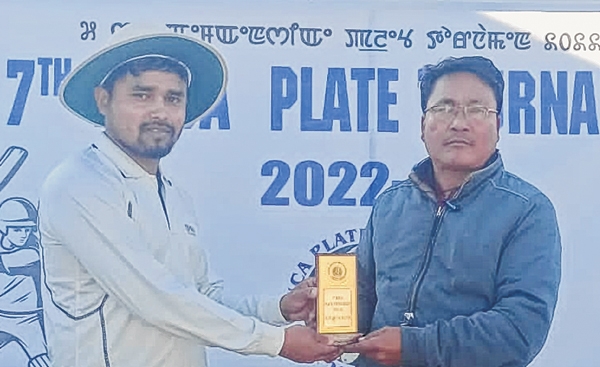 By Our Staff Reporter
IMPHAL, Dec 23 : KCDO-Kongpal notched up a 149-run victory against MPA-Kakching in a Group B match of the ongoing 7th MNCA Plate Tournament at Model Hr Secondary and Oriental College ground today.
KCDO racked up a modest total of 223 runs all out in 36.4 overs after choosing to bat first and restricted MPA to 74 for 9 in 23.2 after Ajit Yumnam retired hurt.
Bikram Phamdom (33), Prakash Nandeibam (31), Tarif Khan (24), Rosabel Sapam (23), MK Amal (22) and Hafiz Imran (21) made significant contributions for KCDO in their innings which saw Nando Chongtham of MPA enjoying a four wicket haul (4/41 in 8 overs) nd Bishal Das snaring three wickets (3/44 in 7.4 overs).
Soram Naoboy and Chinglensana of MPA also clinched a wicket each.
In reply, MPA had a positive start until Chinglensana was run out for 22 runs and the downhill continued for the Kakching side as Mk Amal removed Elangbam Rohit (10) and Moramba Chongtham (0) both in the same over (15th) to reduce MPA to 48 for 3 after 14.4 overs.
Mk Amal then claimed three more wickets to return with the best bowling figures of 5/22 in 5.2 overs while Hafiz Imran claimed two.
Netajit Konsam also had one wicket before MPA had to cut short their innings at 74/9 with Ajit Yumnam was forced to retire hurt in the 24th over.
Mk Amal of KCDO who scored 22 runs and enjoyed a five-for was eventually adjudged man of the match.
NAPSA-Kha Imphal will play AKSDO-Khangabok in a Group A match tomorrow.