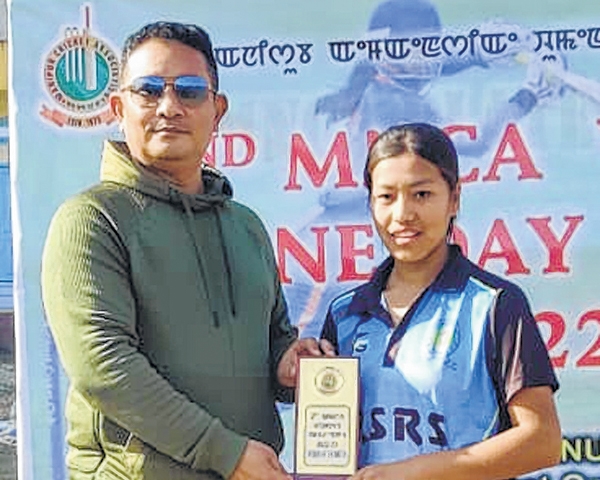 By Our Staff Reporter
IMPHAL, Dec 23 : PTCC-Patsoi Part III cruised to their third straight victory in the 2nd MNCA Women's One Day Trophy with a 7-wicket thrashing of FORCE-Kshetrigao today.
After opting to bat first, FORCE were bowled out for a paltry total of 73 runs as PTCC's Angoubi Devi Khullakpam wreaked havoc before PTCC took just 9.1 overs to seal the victory at the cost of 3 wickets.
Mehanaz with 13 runs in her name was the only batter to cross a double digit run for FORCE in their innings which saw Sanaloo Devi trapped Mehanaz lbw to open the floodgate of wickets after 10.2 overs.
PTCC's Angoubi Devi (3/24 in 7 overs) then claimed three wickets to keep FORCE under tremendous pressure along with Sanaloo (2/11 in 6 overs) and Shrili Irom (2/9 in 5 overs).
Sijapriya Chanu Hijam and Thoudam Mangalsana also picked up a wicket each to close out FORCE innings at 73 in 32.2 overs.
In the chase, Laishram Terasa scored an unbeaten 36 to guide PTCC to a big win.
FORCE's Khadija claimed two wickets and Neha had one.
Khundrakpam Angoubi of PTCC who starred with a three wicket haul was adjudged woman of the match.
AKSDO-Khangabok will play THAU-Thangmeiband in the next match tomorrow.