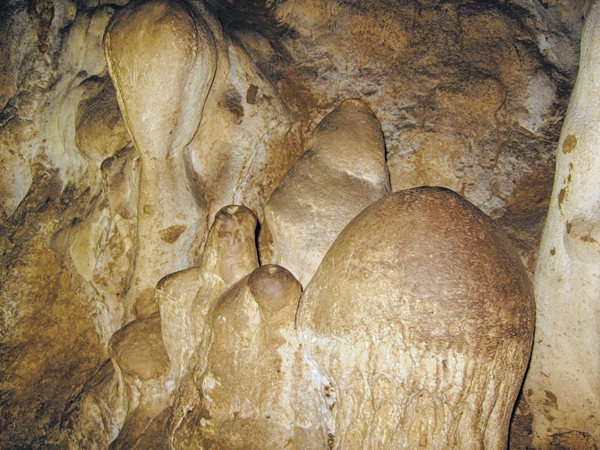 The Andaman & Nicobar Islands have the mandatory triple ‘S’ that attract the tourists – the Sun, Sea and Sand; besides, they have the hills and lush green coverage (which, alas, maybe depleting due to legal and illegal lumbering activities). The Islands also hold some rare natural wonders like volcanoes (both active & dormant), stone arch, limestone cave, etc., that are exotic. Let us now explore the Limestone Cave of Baratang Island which is 100 kms off Port Blair. You need a permit/pass to reach this place but these hassles, including transport, are best handled by the local tour operators. Baratang Island hangs between South and Middle Andaman, on way further up to North Andaman. From Port Blair we have to take the Great Andaman Trunk Road (now called National Highway-4) that unfortunately cuts through the reserved forest area of the Jarawa tribe who are on the brink. Back in the 1970s there was only ferry service to Baratang as this highway was being laid amidst much controversy; I am not sure if the ferry service exists now. The ferry then took 5 ¼ hours from Port Blair straight to Baratang. In 2009 we had no option but to travel with guilty consciousness cutting through the Jarawa land.
From Baratang Island’s Nilambur Jetty the speedboat ride to Nayadera Jetty takes ½ an hour; the route is a lovely combo of open sea and creek bordered with dense mangrove species forming a virtual canopy. If you don’t mind your head … thud! … the mangrove branches would knock you. Then it is a delicate circus boardwalk for 240 mtr, laid upon mangrove creek. Whether you walk gingerly looking out for the missing planks or enjoy the scenery, it all depends. No, it is not over yet; as you land on terra firma it is a further 1 ½ km walk through lush green fields of Nayadera village. We pass through the settlement of retired workers of the forest department hailing from Jharkhand who prefer a solitude atmosphere. It is a settlement of about 50 families amidst a Reserved Forest Area. There was no electricity in 2009 and even for any medical emergency they have to walk through and then take the boat to reach Baratang which, after all, will have only rudimentary health services. Yet, they prefer living there in unison with Nature which aroused in me a mixed feeling of jealousy and sympathy.
There! Sweating and puffing you are at last in front of the limestone cave. No need to utter the magic words ‘Open, Sesame’, because it is open. But once inside a magic world of sedimentary limestone formations – stalactites and stalagmites – awaits you. Crafted by nature it has taken thousands of years for these shapes to form. There are buds, bulbs, even a conch shaped formation, all hanging from the roof of the cave and from its wall. These are called stalactites. There are various other shapes equally forming from the floor of the cave; these are called stalagmites. The amazing formations make your imagination run equally wild.
Stalactite has its origin from the Greek ‘stalaktos’ meaning “dripping”. These are shapes hanging from the cave's roof. As rain /surface water drips through the cave roof it reacts with carbon dioxide and forms carbonic acid which in turn makes calcium carbonate deposits. As time lapses, the hardened deposits form stalactites, looking like icicles.  Stalagmite, the reverse of stalactite, also has its root in Greek; ‘stalagma’ is “to drop”. They take shape on the cave floor as the dripping calcium carbonate ‘drops’ build up over a period of time. Column is the third variety, a rare find.  When a stalactite formation and a stalagmite formation beneath it meet together they harden into a ‘column’/pillar.
In the Limestone Cave of Nayadera we saw a column almost forming; there was just a gap of an inch or two for the stalagmite and stalactite to touch and form a column. Mr. Rama Rao, the Guide (he also ferried us in his fiber boat), had thoughtfully brought an emergency lantern to guide us inside the dark, deep and beautiful cavern. It was he who pointed out this unique ‘column’ feature of the cave. There is no information as to when this cave was discovered, because during my 2 ½ years stay (1978-80) I never heard about this wonder. In fact I passed through Baratang in 1979 to Middle and North Andaman unaware of this beauty. I tried getting this information from [email protected] but so far no reply - official apathy.
As we came out of the Limestone Cave wonderstruck and travel weary, Ms. Magdhali Bhengra smilingly served us nimbu pani (lime juice). It was so refreshing, the likes of which we have never tasted anywhere. So much so that the mere thought of this juice -rather than the wondrous Limestone Cave - excites me even now.
The writer can be reached at [email protected] / 9840917608 Whatsapp