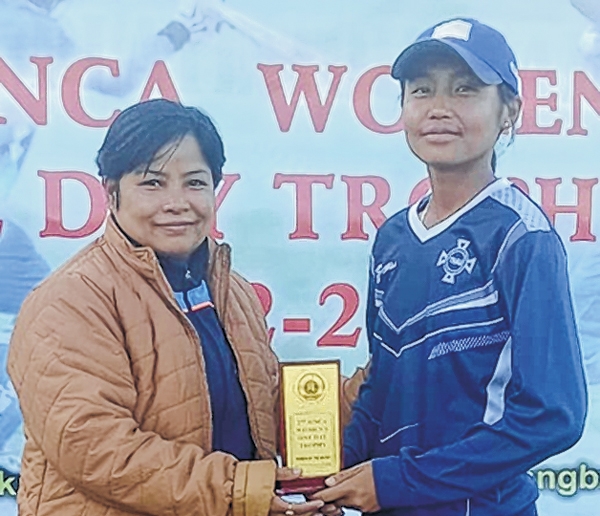 By Our Staff Reporter
IMPHAL, Dec 24 : Niruta Thoudam scored an unbeaten ton as THAU consolidated their place on top of the table in the 2nd MNCA Women's One Day Trophy with 239-run thrashing of AKSDO at Luwangpokpa Cricket Stadium, Luwangsangbam.
THAU amassed a huge total of 306 runs for 6 in allotted 35 overs and skittled AKSDO out for just 67 runs in 34.3 overs to register their third straight win in the 6-team tournament.
Kalpana and Monica gave THAU a good start before Monica (29) was stumped by AKSDO wicketkeeper Shelina off Bijya Khundrkapam's delivery in the 7th over.
Kalpana and star of the day Niruta Thoudam racked up 89 runs for the third wicket off 51 balls to take the score to 135. Kalpana was just a run away from completing her half century when was stumped by Shelina yet again off Puspabati's final delivery of the 15th over.
Niruta then stitched another 89-run partnership off another 51 balls with Milan Chanu (41) who was bowled out by Rabina Khundrakpam for the third wicket in the 3rd delivery of the 24th over as the scoreboard read 224.
Waikhom Ganga (0) was trapped lbw by Rabina Khundrakpam in the same over before Sophia Chanu (2) was stumped by AKSDO wicketkeeper for the fifth wicket off Sophiya Chanu's delivery in the 29th over.
Niruta continued to anchor with Kiranbala Chanu Haorungbam (13) and saw out the innings with Seterny Devi Brahmacharimayum (5) with an unbeaten 121 off 107 balls (13x4, 1x6).
Rabina Khundrakpam of AKSDO returned with the best bowling figures of 3/52 off 7 overs.
In reply, AKSDO faltered badly from the beginning and reduced to 0 for 2 wickets losing Ranjita on duck to Waikhom Ganga just three balls into the innings before Yaiphabi was trapped lbw the very next delivery.
The wickets kept falling with Kiranbala claiming another two wickets and Aishwarika claiming one wicket before Monica Devi Ningthoujam bowled out AKSDO's highest run getter Mangalleibi Salam (11) for her first wicket to leave their rivals struggling at 56 for 8 after 30 overs.
Monica then undone Rabina Khundrakpam (1) and Puspabati Khundrakpam (1) to wrap up the innings at 67 in 34.3 overs and returned with the best bowling figures of 3/6 in 5.3 overs.
Niruta Thoudam who hit an unbeaten ton and claimed a wicket was adjudged woman of the match.
PTRC will play PCC in the next match tomorrow.