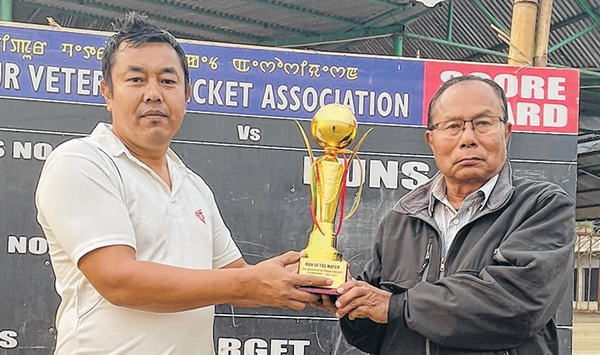 By Our Staff Reporter
IMPHAL, Dec 26 : CHAMP-Khagempalli sealed a 5-wicket win over YUCC-Kwakeithel Moirangpurel in the ongoing 19th Manipur Veteran Cricket Tournament at Luker ground today.
CHAMP held YUCC to 117 for 9 in 27 overs and chased down the target in 21.4 overs with 5 wickets left in hand for the second win in three matches.
M Anand (11) and Lafoiba (3) of YUCC were unbeaten  after Brojendro (12), AK Chingtam (25), Biswajit (19) and K Somorjit (20) played their part. The innings saw CHAMP's Sanjoy pick up three wickets for 23 runs in 6 overs as Bablu Sharma snare two wickets.
Tomthang and Narjit were also among the wicket takers for CHAMP.
In reply, T Surjit (19), Bablu Sharma (23) and Sanjoy (14) set the tone before Robinson scored an unbeaten 36 to take his team to a comfortable win.
Sanjoy of CHAMP who was good in both the bat and ball today was adjudged man of the match.
CYCLONE-Thangmeiband will play LCCC-Lilong Chajing in the next match tomorrow.