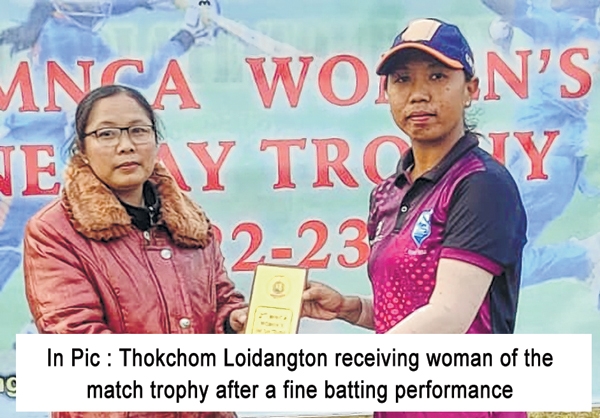 By Our Staff Reporter
IMPHAL, Dec 26 : Model Club-Chingamakha defeated AKSDO-Khangabok by 8 wickets courtesy VJD method in a match which was curtailed to 18 overs an innings due to inclement weather condition at Luwangpokpa Cricket Ground.
AKSDO won the toss and managed to gather 75 runs for 3 wickets before a light drizzle interrupted the match forcing each innings to reduce to 18 overs and the target was revised at 114.
Shelina Chanu, unbeaten on 36, was the highest run getter for AKSDO after Ranjita Chanu was bowled out by K Meela Chanu of Model Club.
In the chase, Loidangton Devi Thokchom found the fence 7 times to post an unbeaten 57 off 39 deliveries and Banti Sharma Shanglakpam scored 27 to steer Model Club to winning 114 for 2 wickets within 12.5 overs.
Alish Thokchom and Sophiya Chanu managed to claim a wicket each in this innings.
Thokchom Loidangton who led Model Club to the 8-wicket victory was named woman of the match.
Tomorrow, THAU-Thangmeiband will play FORCE-Kshetrigao.