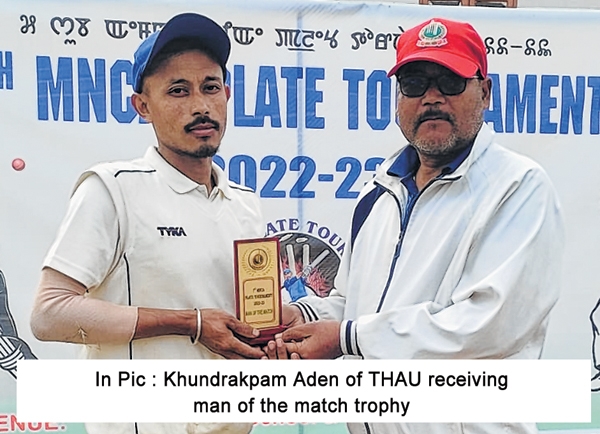 By Our Staff Reporter
IMPHAL, Dec 26 : Reolin Oinam's five wicket haul including a hat-trick went in vain as THAU crushed SHADOW by 100 runs in an all-Thangmeiband team clash in the MNCA Plate tournament which was cut short due to rain.
THAU collected 151 runs for 9 in 30 overs and with the rain  interrupting the match for a while the target was reduced to 140 in 30 overs via VJD method. SHADOW were then bowled out for 39 in 16.2 overs as N Surash and Khundrakpam Aden shook up the batting line up.
For THAU, Khundrakpam Aden scored a half century (61 off 77 balls, 6x4, 1x6) after Reolin Oinam of SHADOW who removed James for the first wicket in the first over shone with a hattrick in the third over.
Reolin bowled out Roshinikumar Ngangbam and Hijam Anilkumar in the 3rd and the fourth deliveries before Malesh Kumar Ngangbam holed out to Yohenba Thoudam in the fifth delivery to complete his hattrick. It was not the end for Reolin as he also trapped Khumukcham Romesh lbw in the final delivery of the third over to complete his five wicket haul and reduced THAU to 18 for 5.
Reolin however failed to stop Khundrakpam Aden from taking his side past the 150 run mark.
Rahul Kumar of SHADOW also picked up two wickets as Guite Khualminlian managed one.
In reply, SHADOW had a disastrous start and fell to 8 for 2 in 3.1 overs with Khundrakpam Aden removing Denis for duck in the second over and Yoihenba Thoudam in the fourth over.
N Surash then removed Kh Devis and Bipin Haobam on ducks both in the 5th over to further reduce SHADOW to 9 for 4.
The downhill for SHADOW continued with N Surash claiming two more wickets in the 7th over to complete his four wicket haul and leave SHADOW struggling at 11 for 6.
Khundrakpam Aden then completed his three wicket haul by bowling out RK Nishikanta for 8-ball duck and Yumkham Ortega and Malesh Kumar Ngangbam picked up a wicket each to end the chase.
Eventually, Khundrakpam Aden who scored 61 and returned with bowling figures of 3 for 14 in 6 overs was adjudged man of the match.
IBSA-Yumnam Leikai will play SSU, Singjamei Kakwa in the next match tomorrow.