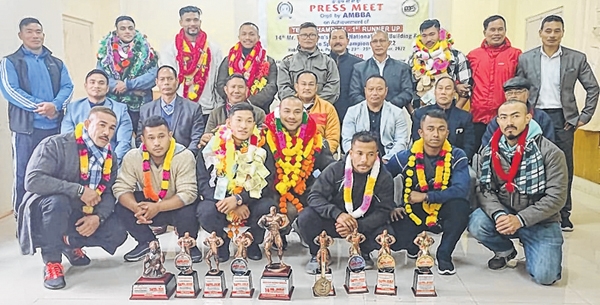 By Our Staff Reporter
IMPHAL, Dec 27 : All Manipur Body Builders' Association, which came to existence in 1950, has created history as State bodybuilding team finished overall runners up in the 14th Mr India Senior Men's Bodybuilding and Physique Sports Championship which was held from December 23 to 25 in Ludhiana under the supervision of IBBF.
The State team amassed 3 gold and 3 silver medals across categories to seal the overall runners up title.
The team were accorded a warm reception upon their arrival at Imphal International Airport today by the officials of the All Manipur Body Builders Association and sports enthusiasts before a formal felicitation programme was held at Manipur Olympic Association's conference hall, Khuman Lampak Sports Complex.
Speaking at the programme which was also attended by many functioneries of the association including advisors, president of the association N Ratan who also coached the State team at the recently concluded event said that Manipur has been able to leave a mark at the National event all thanks to the dedications and hard work of the athletes and the due to the love and support of their guardians and well wishers.
In the wake of the performances of the State athletes, the National federation (Indian Body Builders Federation) has given the nod to host the Senior Mr India contest in the State in 2024, N Ratan said.
To successfully organise the National event is a big responsibility and would require huge efforts, he said while seeking support from all sections in making the event colourful and successful.
In the meantime, team manager S Dhruva lauded the performances of the State athletes and further encouraged the athletes to better their performances in the coming editions and bring home the overall champions trophy.
Among the 11 athletes from Manipur participating at the 14th Mr India Bodybuilding and Sports Physique Championship, L Neta (55 kg), Ksh Maradona (85 kg) won bodybuilding gold as Maibam Robert bagged the other gold medal in men's Fitness Physique competition.
In the 100 kg category bodybuilding competition, Nelson NK won a silver medal as Jayjit Waikhom and Mangal Arambam claimed a silver medal respectively in the men's Athletic Physique and men's Fitness Physique competitions. Warsim Chesam managed 4th place in the men's Sports Physique event for above 165 cm category.
The championship was participated by around 550 athletes from 27 State units and 7 Government Sports Boards and Manipur amassed 125 points to finish runners up.
Railway Sports Promotion board with a total of 315 points were crowned overall team champions.