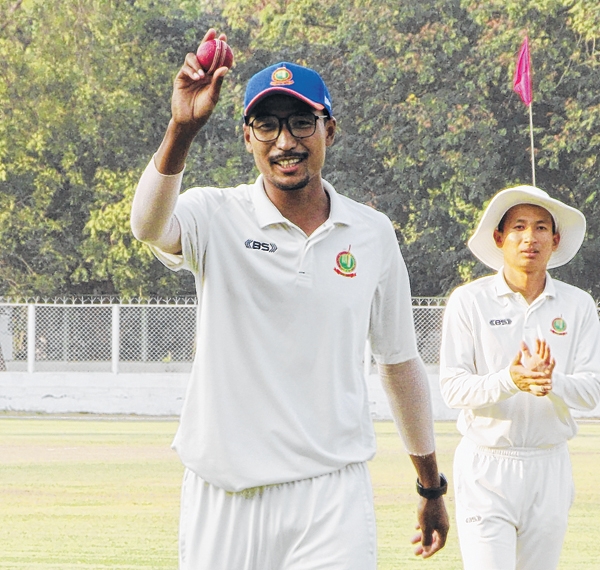 By Our Staff Reporter
IMPHAL, Dec 27 : Manipur rode on Bishworjit Konthoujam's prolific bowling performance to bowl out Arunachal Pradesh for 233 in 87.5 overs of the first innings today in a Ranji Trophy Plate group match at Lal Bahadur Shastri Stadium, Anand (Gujarat).
Manipur won the toss and elected to field first.
Arunachal Pradesh had a stuttering start and were left in the lurch with right arm pacer Bishworjit dispatching top three batters including both the openers. Bishworjit opened his account by sending off Kumar Nyompu (4 off 40 balls) cheaply in the last delivery of the 12th over.
Bishworjit bounced back yet again and bowled out Anup Ahlawat (13) and Arunachal Pradesh skipper Suraj Tayam on 2-ball duck in the 1st and the 3rd delivery of the 16th over to reduce Arunachal Pradesh to 23 for 3.
Before Arunachal Pradesh got a breathing space, Jotin Pheiroijam who claimed a record haul of 9-wicket against Sikkim on his debut match trapped Rahul Dalal lbw for 11 runs.
After the wicket spree, Vipin Ajay Dhaka (33) and Kamsha Yangfo (41) resurrected the innings by adding up 55 runs together for the 5th wicket off 95 balls before L Kishan Singha broke the partnership by removing Vipin Ajay Dhaka in the 40th before trapping Kamsho lbw in the 46th over to leave Arunachal Pradesh struggling at 108 for 6.
Akhilesh Shahani (24) who looked to settle with Chandan Kumar Singh fell for the 7th wicket as he hit straight to Priyojit in Bikash Singh delivery in the 53rd over.
Chandan Kumar (30) and Tempol (33) forged another 55-run 8th wicket partnership off 132 balls before Tempol was caught behind by Manipur wicketkeeper Prafullomani off RK Rex in the 75th over as the scoreboard read 196.
Bishworjit who had a splendid time early one then bowled out Chandan Kumar and Nabam Abo (2) to wrap up Arunachal Pradesh innings at 233 in 87.5 overs. With this Bishworjit returned with the best bowling figures of 5 for 47 runs in 19.5 overs of which 6 overs were maiden.
Bowling all-rounder L Kishan Singha in the meantime finished with 2 for 55 in 22 overs.