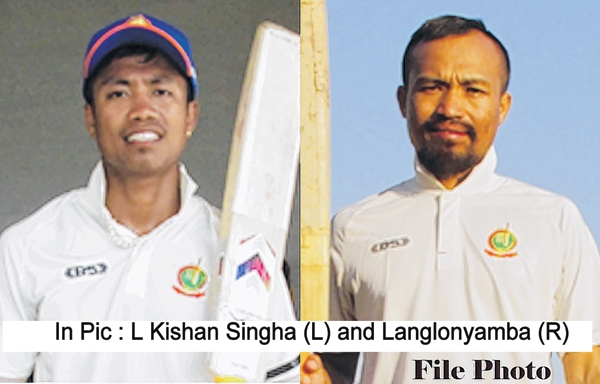 By Our Staff Reporter
ANAND (GUJARAT), Dec 28 : Langlonyamba Meitan-keisangbam (91) and L Kishan Singha (58) scored half centuries as Manipur posted a first innings total of 287 runs in 78.1 overs and and a 54-run lead against Arunachal Pradesh on Day 2 of their third Ranji Trophy plate group match at Lal Bahadur Shastri Stadium, Anand.
Manipur had a disastrous start to their first innings losing Karnajit for 1 in 1.3 overs being trapped lbw by Akhilesh Shahni. Manipur skipper Langyonyamba who came in for Karnajit however forged a significant 78 run partnership with B Rahman (37) who holed out to Rahul Dalal on Chandan Kumar Singh's second delivery in the 21st over.
Manipur lost their third wicket in the form of Prafullomani (1) to Chandan Kumar who completed his three wicket haul by removing Priyojit K for 10 to reduce Manipur to 99/4 after 27 overs.
Despite losing three wickets back to back in 7 overs Langlonyamba maintained his cool and kept the scoreboard ticking by adding 31 runs together with Ronald M (17) and 42 runs together with L Kishan Singh to take the tally past 150 mark.
Nabam Abo however got rid of him for the sixth wicket when he was just 9 runs away from hitting a ton (91 off 138 balls, 12x4) in the 47th over.
L Kishan Singha then took charge of the innings and forged a 55-run partnership off  105 deliveries for the 7th wicket with Jotin Pheiroijam (18) who got run out by Nabam Abo.
After steering Manipur past the 200 run mark, L Kishan Singha was undone for 58 runs off 108 deliveries (7x4) as attempted a boundary off Akhilesh Sahani but the ball went straight to the waiting hands of Tempol.
Rex was not out on 28 as Manipur wrapped up the first innings for 287 runs in 78.1 overs.
Chandan Kumar Singh of Arunachal Pradesh returned with the best bowling figures of 3/66 in 18 overs which contained two maidens as Nabam Abo (2/69) and Akhilesh Sahani (2/52) finished with two wickets apiece.
Resuming the day Arunachal Pradesh started their second innings on a slow note and were trailing behind by 34 runs at Stumps as Anup Ahlawat (14/34) and Kumar (6/20) gathered 20 runs in 9 overs.
Bishworjit who bagged a five wicket haul in the previous innings continued his fierce bowling and managed 3 maidens off the 4 overs he bowled today spilling just 5 runs before the day was called.