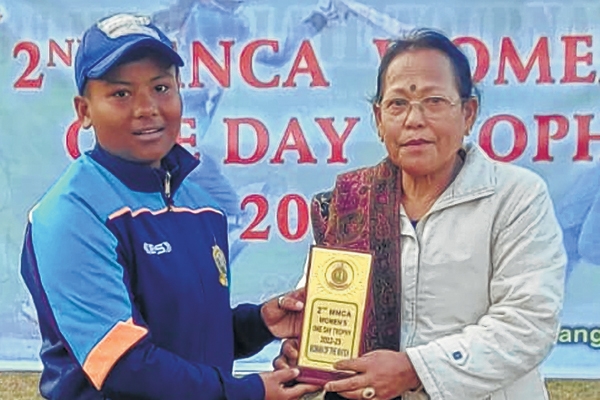 By Our Staff Reporter
IMPHAL, Dec 28 : PTRC-Patsoi Part IV trounced AKSDO-Khangabok by 127 runs today for their 4th win in their penultimate match of the 2nd MNCA Women's One Day Trophy to climb on top of the table.
The result helped PTRC almost seal a final berth courtesy of a strong net run rate figure. PTCC and THAU who have won three of three matches each are among the contenders for the final berth and the winners.
Put in to bat first here at Luwangpokpa Cricket Stadium, PTRC racked up 203 runs for 4 in allotted 25 overs and restricted AKSDO to 76 for 4 to secure the convincing win today.
Kiranbala Palujam (36) and Linthoingambi Chanu (44) gave  PTRC early flourish today before Manimacha (30) and RK Linthoingambi (49) had an unbeaten 5th wicket partnership and took PTRC beyond 200 run mark.
AKSDO conceded 40 extra runs in this innings which saw Bijiya claim a wicket for 37 runs in 5 overs.
In the chase, AKSDO had a stuttering start and were reduced to 10/2 in 5.2 overs with Yaiphabi getting run out for 1 and Ranjita Chanu getting lbw out for 2. Mangalleibi (13) and Shelina (27 not out) managed to add a 62 run partnership off 104 deliveries before Mangalleibi was bowled out by Ranjita Devi for the third wicket but it was too late for them and their chase eventually succumbed to 76. Bijiya Khundrakpam was also not out on naught.
L Linthoingambi of PTRC who scored 44 runs and picked up a wicket was adjudged woman of the match.
THAU-Thangmeiband will play PTCC-Patsoi Part III tomorrow in the next match.