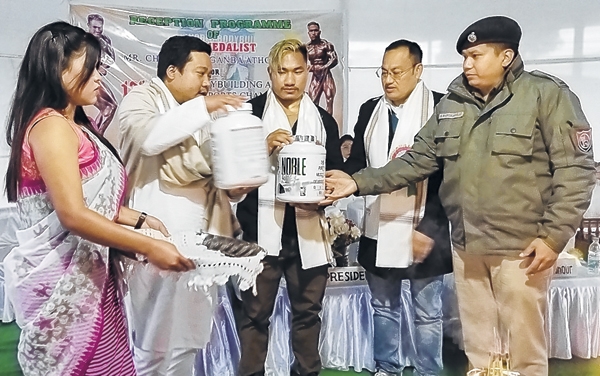 Our Correspondent
Thoubal, Dec 28 : Chingkheinganba Athokpam who won a gold medal in the 13th World Bodybuilding and Physique Sports Championship recently held at Phuket in Thailand under the aegis of World Bodybuilding and Physique Federation was accorded a warm reception at his Thoubal Athokpam locality.
The reception programme was organised by Athokpam Youth's United at Athokpam Heikrengmakhong Lampak in the presence of Khangabok AC MLA, Okram Surajkumar; AMBBA president N Ratan and Additional SP (Ops) Thoubal, Okramcha Wangkhomba as dignitaries.
It may be noted that Chingkheinganba won the gold medal in the above 75 kg category for junior men at the world championship.
The speakers at the occasion lauded Chingkheinganba for his achievement and said that representing India at international events and bringing home medals is a matter of pride.
While extending best wishes to the athlete for his future endeavours, the dignitaries also assured to provide all possible support to Chingkheinganba in the future.