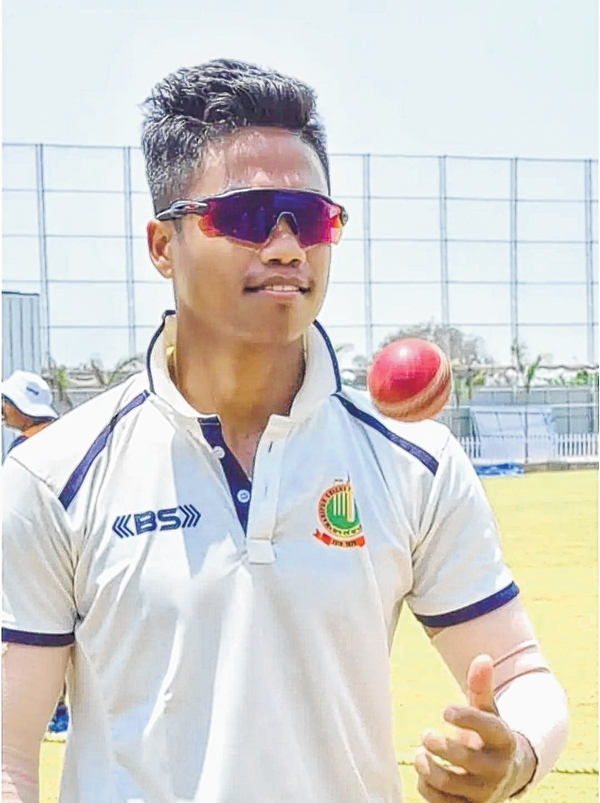 By Our Staff Reporter
ANAND (Gujarat), Dec 29: Bowling all rounder Kishan Singha produced a prolific bowling performance to bolster Manipur's hope of first win in the Ranji Trophy plate group match this season against Arunachal Pradesh at Lal Bahadur Shastri Stadium, Anand.
Kishan picked up 6 wickets today (Day 3) and led Manipur in wrapping up Arunachal Pradesh's second innings for 251 runs in 95.5 overs. Pace duo of Rex (2/62 in 18 overs) and Jotin Pheiroijam (2/23 in 9 overs) played a significant role in keeping Arunachal Pradesh under pressure.
Resuming their innings on 20/0 (in 9 overs), Arunachal Pradesh slumped to 41 for 2 losing Nyompu (7) and Vipin Ajay (13) to young pacer Jotin Pheiroijam.
Kishan opened his account by dismissing Anup Ahlawat for 52 after he forged a 52-run partnership for the third wicket with Suraj Tayam (22) who was then removed by RK Rex for the fourth wicket as the scoreboard read 103 after 40 overs.
L Kishan Singha then trapped Kamsa Yangfo lbw for 6 and got rid of Rahul Dalal (37), Akhilesh Sahani (26), and Chandan Kumar Singh (37) in succession to break the backbone of the middle order and reduced Arunachal Pradesh to 213/8 in 86.2 overs.
RK Rex again trapped Tempol (19) for the 9th wicket in the 92nd over before L Kishan Singha completed his 6-wicket haul by bowling out Nabam Abo for 3 to end the innings.
Continuing the day, Manipur posted 10 runs (second innings) for no loss in 1 over at stumps today. With this, Manipur need 188 runs to win when they resume their second innings tomorrow.