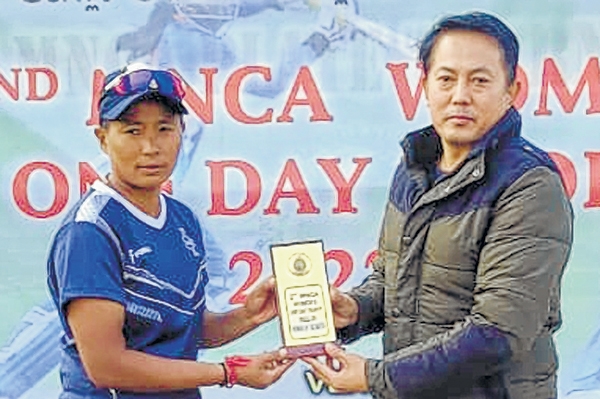 By Our Staff Reporter
IMPHAL, Dec 29 : THAU (W) Thangmeiband have topped the point tally of the 2nd MNCA Women's One Day Trophy after sealing an easy 235 runs win over PTCC (W) Patsoi at Luwangpokpa Cricket Stadium, today.
The Thangmeiband team smashed 274 with just two wickets down in the 35 over match with maximum runs coming from right handed Waikhom Ganga who scored as many as 161 runs off 100 deliveries. She hit 23 boundaries (20 fours and 3 sixes) while her team-mate Kalpana Devi struck an unbeaten half century (50 off 58 balls).
The bowlers of PTCC who took the two wickets were Sanaloo Devi Talkhelmayum and Sijapriya Chanu Hijam.
In the chase, PTCC were bowled out for 39 in 22.4 overs as the bowlers of the Thangmeiband showed dominance and removed the top order batswomen of their opponent in a quick succession with maximum wickets fell by Niruta Thoudam (4 wkts) and Aishwarika Chanu Moirangthem (3 wkts).
None from the losing side scored a double digit run in the entire innings and they hit only one boundary (four).
Notably, nearly half of the runs (18) of  PTCC  came from extras.
Waikham Ganga was given the woman of the match title for her exceptional batting performance (161 runs off 100 balls).
THAU Thangmeiband have won all their four matches and are topping the chart (8 points) while PTRC (W) Patsoi stood second in the tally  with the same points.