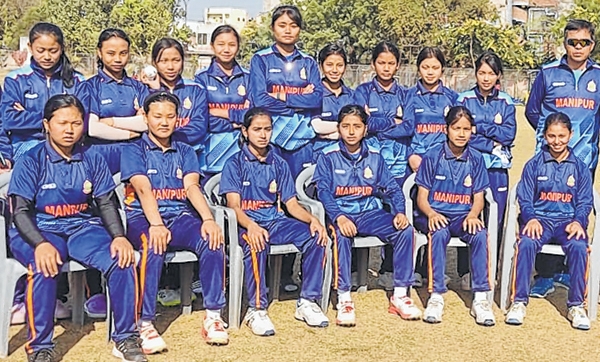 By Our Staff Reporter
IMPHAL, Dec 30 : Manipur lasses scripted a 31 run victory against Meghalaya today at KL Saini Stadium in Jaipur for first win in the Women's U-15 One Day Trophy.
Manipur after elected to bat first, got bundled out for 79 runs in 19.1 overs but rode on Alina's five wicket haul to bowled Meghalaya out for a meagre total of 48 runs in 21.1 overs to seal the victory.
For Manipur, Barkatun top-scored with 23 runs off 30 balls followed by skipper L Prena (17).
SR Mark of Meghalaya claimed a total of 5 wickets as J Mark snared twice in Manipur's innings before they had a nightmarish chase.
Meghalaya captain Jayshree with 8 runs was the highest run getter in their innings which saw Alina enjoying a five wicket haul and Niruka and Priyanshee grabbing two wickets each to set up the big collapse.
Manipur will play Punjab on January 1 in their fourth match of the competition.