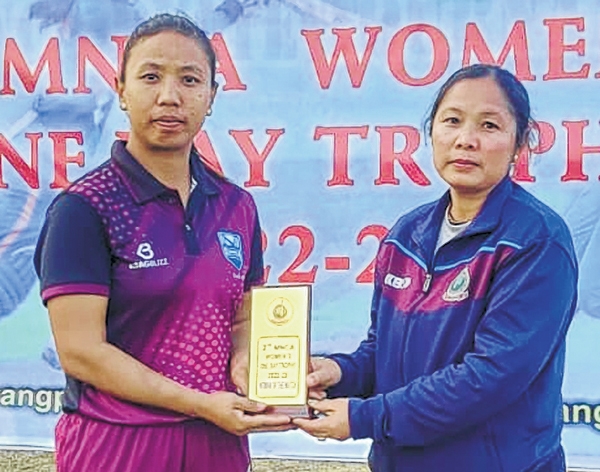 By Our Staff Reporter
IMPHAL, Dec 30 : Model Club defeated FORCE by 176 runs in an inconsequential match of the ongoing MNCA Women's One Day Trophy today at Luwangpokpa Cricket Stadium, Luwangsangbam.
It may be mentioned that PTRC-Patsoi Part IV and THAU-Thangmeiband have already qualified for the title clash of this 6-team tournament.
Model Club posted an imposing total of 271 runs for 6 after electing to bat first thanks to Loidangton Devi's 71-ball 95 not out and 96 extra runs spilled by FORCE bowlers. Model Club then restricted FORCE to 95 for 9 in 27 overs to seal the huge win.
Chingkheileima Chanu Mangsatabam (25), Sanatho Devi Leihaorungbam (21) and K Meela Chanu (28 not out) also got their names in the scoresheet with significant contributions for Model Club.
FORCE's skipper Khadija picked up 3 wickets for 18 runs in her spell of 6.3 overs while Firdouse, Neha and Sahani managed a wicket each in Model Club's innings.
In reply, FORCE batters were given a torrid time from the onset and had to wrap up the innings for 95 runs after Kolom Bidyaluxmi, K Meela Chanu, Chingkheileima Mangsatabam and Rebika Oinam picked up two wickets each.
Firdouse with 14 runs emerged the highest run getter for FORCE.
Thokchom Loidangton who scored an unbeaten 95 was adjudged woman of the match.
THAU, who emerged league winners with a match left to spare, will face PTRC in the final on January 2, 2023.