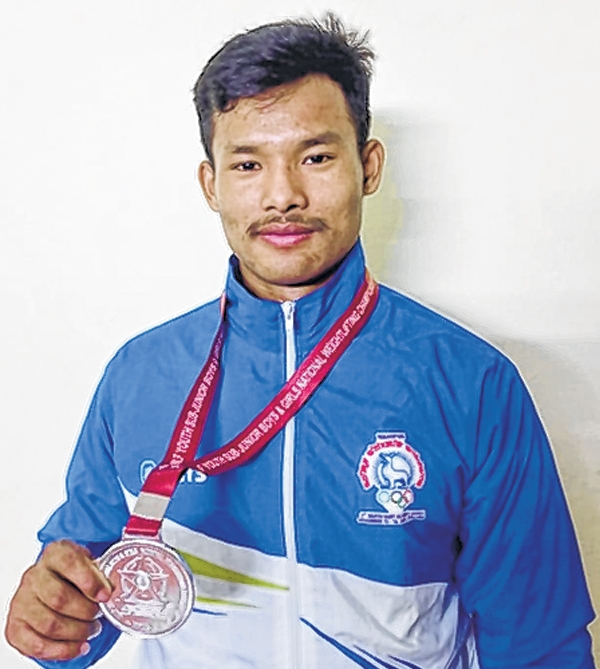 By Our Staff Reporter
IMPHAL, Dec 30 : N Tomchou Meetei broke National clean and jerk record in youth men's 55 kg category at the IWLF Youth, Junior and Senior National Weightlifting but had to settle for the silver medal as S Guru Naidu took the gold medal with a record lift of 233 kg.
Guru Naidu of Andhra Pradesh started his quest for gold with a 104 kg lift in snatch having started with 100 kg in first attempt but faltered in his third attempt to lift 106 kg.
Manipur's N Tomchou in the meantime started with 98 kg in first and finished with best 102 kg after he failed to lift the same weight in his second attempt.
In clean and jerk, S Guru finished with 129 kg after starting with 125 kg lift to amass a total of 233 kg to shatter his own previous National record of 230 kg.
Manipur's N Tomchou kicking off with 125 kg lift then broke previous year's record of 126 kg that too set by S Guru Naidu but was two kg short to seal the gold medal.
Vijay Prajapati of Madhya Pradesh who lifted a total of 216 kg (96 in snatch and 120 in clean and jerk) finished third in the same competition to finish with the bronze medal.
The event is underway at Nagercoil, Tamil Nadu since December 27 and will run till January 7 (2023).