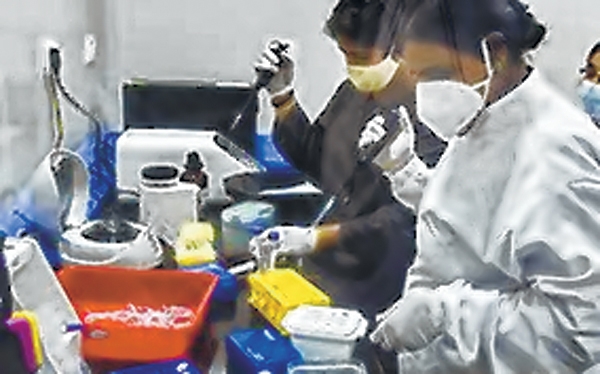 NEW DELHI, Dec 31
India has reported its first case of Omicron variant ‘XXB 1.5’ which is responsible for the surge in coronavirus cases in New York. The first case of XXB 1.5 has been confirmed in Gujarat, as per reports in Timesnow and Mint. XBB 1.5 now represents about 41 per cent of new cases nationwide in the US, nearly doubling in prevalence over the past week, according to the data published Friday by the Centers for Disease Control and Prevention.
With the detection of the first XBB 1.5 case closer home, Maharashtra State public health authorities are now focused on not allowing the sub-variant to enter the State due to its proximity to Gujarat, TOI reported.
Dr Pradeep Awate, Maharashtra surveillance officer, told TOI, “We are keeping a watch on the genetic footprints of the virus. The State is carrying out 100 per cent genomic sequen-cing, while international arrivals are also undergoing thermal screening and random sampling of 2 per cent of these is also being done. Positive samples are then being sent for genome sequencing.”
According to Epidemiologist Eric Feigl-Ding, the new variant is more immune evasive and better at infecting than BQ and XBB. He said multiple models shows that XXB 1.5 variant is much worse in transmission R value and infection rate than previous variants.
Scientists at Columbia University have warned that the rise of subvariants such as the XBB family could “result in a surge of breakthrough infections as well as re-infections.”
India reported 226 new coronavirus infections, raising the tally to 4.46 crore, while the active cases increased to 3,653, the Union Health Ministry said on Saturday.
The death toll stands at 5,30,702 with three fatalities reconciled by Kerala, data updated at 8 am by the Ministry stated.
The daily positivity rate was recorded at 0.12 per cent while the weekly positivity rate was pegged at 0.15 per cent, the Ministry said. India.com