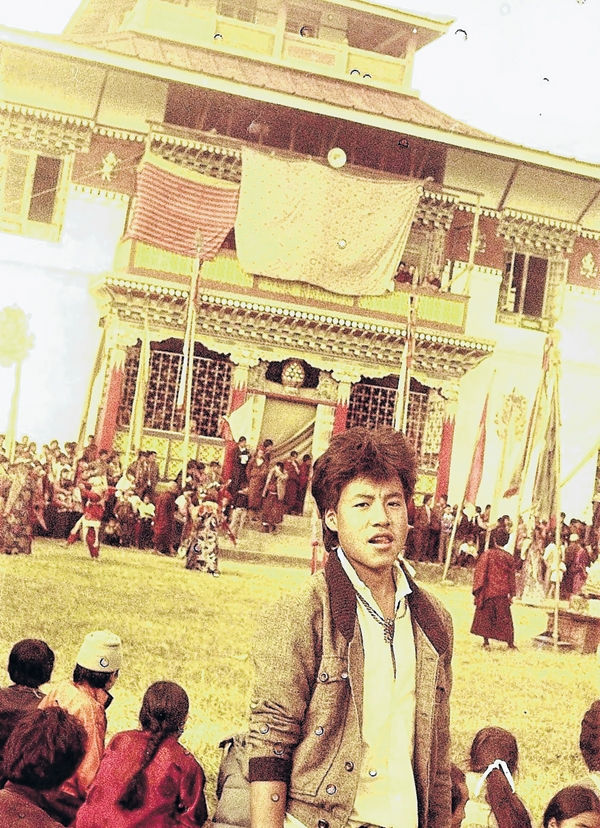 S Balakrishnan
Yak & Yeti Hotel! The rhythmic signage caught my attention even as the rattling SNT (Sikkim Nationalised Transport) bus came to a jerking halt for tea break at Phodang. The ramshackle bus was heaving its way up from Gangtok, Sikkim’s capital town, to Mangan, the remote headquarters town of the remote North Sikkim District (67 kms). I was traveling to Singhik, 4 kms further beyond Mangan. Singhik is a good viewpoint for the snowy mountain range. As I got down for a breath of fresh air, I never had the remotest clue that I would be staying at Yak & Yeti hotel three days later. But then I heard of the ensuing winter ‘chham’, the religious dance, at Phodang Buddhist Monastery. Not to miss the opportunity that literally came in search of me I decided to extend my trip and also instantly book for accommodation at Yak & Yeti. I didn’t care to inform my office about my intention of extension or extension intention. Even if I had cared there was no way. It was a period when landline was the only mode of telecommunication. Cell phones had not arrived, so no WhatsApp, Twitter or even SMS. When the landlines were not perfectly functioning even in the State capital of Gangtok, what to say about the remote North Sikkim District! But this ended up in a comical situation. When I did not report back at the office as per original plan, my kind-hearted boss (Mr. T.K. Kaushish) got worried and contacted the police department. They located me enjoying the religious dance at the Phodang Monastery! Well, it was not very difficult to spot me; I was the only outsider (besides a few foreigners) and I was black skinned!
I landed up at Phodang’s Yak & Yeti Hotel on 10th December 1985 from Singhik, standing for three hours in the crowded bus (33 kms). The ‘unofficial’ fare was six rupees; ‘unofficial’ because no ticket was issued as was the practice by the SNT crew then. No wonder SNT was at a loss! Maybe I would have had to cough up more fare had I got a seat. That much of saving, I consoled myself, as all my trips were shoestring budget trips.
I was welcomed at Yak & Yeti by a smart boy.  He was Ugen Chewang Bhutia, son of the proprietor. I was struck by his good English. He told me he was a class X student in a Christian convent in South Sikkim and a hosteller there itself as the convent was 65 kms away from Phodang. He was in Phodang as it was winter break for the schools. I was happy I could comfortably converse with someone in English because I was hesitant / scared to use my broken Nepali. After a sumptuous meal (rice with chicken curry), he accompanied me to the Gompa (monastery) to watch the charming ‘chham’ till evening. It was to welcome the ‘Losong’ (Sikkimese New Year).
As I climbed down from the monastery (the monasteries are usually at a higher altitude) shivering in the December cold, Ugen offered me a plate of steaming momos & tea. A peg of hard drink later gave me the strength to ward off the cold weather. The hotel was built on the National Highway 31-A that connected North Sikkim with the rest of the State. It was scary to see the back side of the hotel – it was a dangerous slope all the way down to the valley! The supper was rice with greens, all piping hot!
The next morning, I took off to the Gompa after drinking just a cup of tea. No time to lose as it was the final day of the ‘chham’ with the climax of the evil getting destroyed by the good force. A Canadian pair accompanied me from the lodge. When I returned to Y&Y by 6 PM, I was terribly hungry because I had survived the whole day with just a 3-rupee biscuit packet. So I very much relished the supper that consisted of rice, dhal & vegetables. While chatting with Ugen after supper, I appreciated the nice name ‘Yak & Yeti’ that they had given to their hotel. ‘Oh, yes! The yak plays an important role in the lives of people living in the higher altitudes, and Yeti, as you know, uncle, is a mystic being’, he explained.
Ugen was a jack of all trades at Y&Y that offered both lodging & boarding facilities. He looked after the needs of the guests, supervised the kitchen, managed cash, maintained the accounts, did the purchase, and saw to the cleanliness of the hotel that had six rooms. I could not help wondering at his tactfulness. He was from the Bhutia community, one of the three major communities of Sikkim, the other two being Nepalis and Lepchas.
It was time to leave for Gangtok (38 kms) on the third day morning with tea & zaro (Tibetan bread) at Yak & Yeti Hotel. The room rent for two nights was 30 rupees with another 25 rupees for food & drinks.  But I missed the morning bus from Namok. So I had to wait till 11 ½ to catch the bus from Mangan to reach Gangtok by 3.30 PM. When I finally closed the accounts, I was happy that the three-day Phodang trip had cost me a fat 300 rupees and not more; this included two colour film rolls + their developing charge.
When I visited Sikkim much later in 2016, despite my desire I could not visit Phodang. In December of 2022, after 37 long years, I wonder how both Yak & Yeti Hotel and Ugen Chewang Bhutia would have transformed now!
Ther writer can be reached at [email protected] / 9840917608 Whatsapp