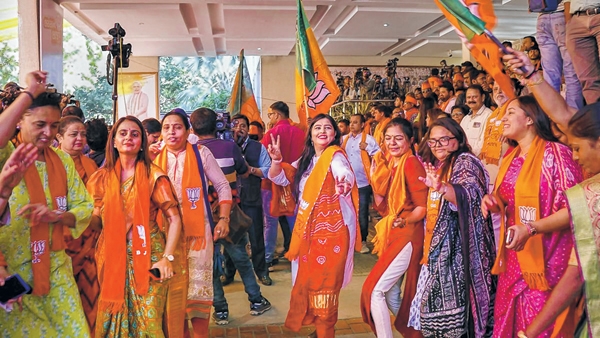 New Delhi, Dec 8
The Congress on Thursday suffered its worst-ever defeat in Gujarat but won in Himachal Pradesh, a mixed bag result for the party that not only faces a rampaging BJP but an ambitious AAP which fared far better in Gujarat.
While the grand old party wrested Himachal Pradesh from the BJP and keep the “rivaj (tradition)” of alternate Governments in the hill State alive, it suffered a crushing defeat in Gujarat where it got just 10 per cent of the seats in the 182-member Assembly with the AAP getting over 12 per cent of the vote share.
In Himachal Pradesh, the Congress found itself in a better position leading on 40 seats with a vote share of over 40 per cent with the AAP at a dismal third with about one per cent vote share.
However, a dismal showing in the Gujarat polls comes as a big jolt for the party as it risked ceding the space of Opposition in the State to the Arvind Kejriwal -led AAP in a State which has been bi-party over the years.
It would also impact its bargaining power vis-a-vis other Opposition parties. Also, losing Gujarat badly could add to the exodus of leaders that the party has been facing.
Prime Minister Narendra Modi’s Bharatiya Janata Party on Thursday headed for a record victory in Gujarat as counting of votes entered the last leg, giving the ruling party a lead in 100 seats and a win in another 57 seats in the 182-member State Assembly.
The Congress party was seen finishing a distant second. It had won 6 seats and was leading in 10 others, while the Aam Aadmi Party was leading in 5 seats.
Others, including independent candidates, were ahead in 4 seats, the Election Commission said as most seats completed counting more than three-fourths of the votes cast in the two-phase elections held earlier this month.
BJP has so far received 53 per cent of the votes counted, while Congress had 27 per cent and AAP 13 per cent.
If the trends continue, the BJP would not only beat its best showing till date — 127 seats in 2002, but also surpass the all-time record set by the Congress party in 1985, when it won 149 seats under the leadership of late Madhavsinha Solanki.
The counting of votes for the Gujarat and Himachal Pradesh Assembly elections began on Thursday at 8 am.
The counting in Gujarat began at 37 centres in 33 districts. While in Himachal, there are 68 counting halls in 59 locations across the State.
Himachal Pradesh’s Chief Electoral Officer (CEO) Maneesh Garg said that 10,000 duty staff including the security personnel have been deployed as part of security arrangements in Himachal Pradesh He said that teams of returning officers and assistant returning officers have also been deployed to ensure a smooth counting process. While, Gujarat Chief Electoral Officer P Bharathi said that 182 counting observers, 182 election officers and 494 assistant election officers will be on duty for the counting process. There will be an additional 78 Assistant Election Officers for the counting of votes. In addition, 71 additional Assistant Election Officers have been assigned responsibility for the electronically transmitted postal ballot system in the previous polls.
Gujarat
Earlier on December 1 and 5, Assembly elections in Gujarat were held in two phases. The approximate voter turnout in Gujarat by the end of the second phase of the Gujarat elections was recorded at 59.11 per cent. During the first phase of polling on December 1, Gujarat saw an overall turnout of 63.14 per cent. While polling for 68 assembly seats in Himachal Pradesh was held on November 12 The approximate voter turnout in Himachal polls recorded 75.6 per cent turnout, breaking the 2017 record. Meanwhile, the exit polls have indicated a clear win for the incumbent Bharatiya Janata Party (BJP) in Gujarat.
Himachal Pradesh
Both BJP and Congress have claimed victory in the state of Himachal Pradesh which has had a tradition of changing governments for the past several years According to the exit polls predicted on Monday in Himachal Pradesh, BJP has the edge over Congress in a tough fight. While most exit polls predicted that BJP will likely retain Himachal Pradesh, one exit poll predicted Congress to lead in the sweepstakes to form government in the hill state.              Agencies