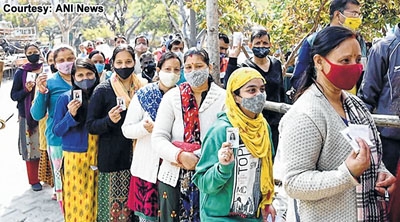 Lucknow, Feb 10
Voting has concluded for the first phase of the 2022 Uttar Pradesh Assembly elections. A total of 623 candidates, including 73 women, were in the fray in 58 seats across 11 districts in the first phase.
The Election Commission of India (ECI) said an estimated voting percentage of 60.1 per cent was recorded during the first phase of voting today.
Voter turnout was 57.79 per cent till 5 pm.
Voting percentage was 61.78 per cent at polling stations in Shamli district, 62.14 per cent in Muzaffar Nagar, 61.35 per cent in Baghpat, 58.52 per cent in Meerut, and 54.77 per cent in Ghaziabad and Gautam Buddha Nagar.
Similarly, Hapur district witnessed an average voter turnout of 60.50 per cent till 5 pm. The voter turnout in Bulandshahr was 60.52 per cent, 57.25 per cent in Aligarh, 58.51 per cent in Mathura and 56.61 per cent in Agra district.
The 11 districts where voting was held on Thursday had a total of around 2.28 crore eligible voters, including 1.24 crore men and 1.04 crore women besides others.
Stating that polling was largely peaceful, Additional Chief Election Officer (ACEO) BD Ram Tiwari was quoted as saying by news agency PTI, "There were reports of a technical error in EVMs at some places. Those EVMs are being replaced."
Nine Ministers of the UP Government, including Suresh Rana, Atul Garg and Shrikant Sharma, were also in the fray from Thana Bhawan, Ghaziabad and Mathura, respectively. In 2017, BJP had bagged 53 of the 58 seats where voting was held on Thursday.
Manna Devi, a 106-year-old woman, was among those who cast her vote at a polling booth in UP's Hapur district.
A resident of Latifpur Mazara Sapnawat village in Hapur, Manna Devi was assisted by ITBP jawans as she practiced her right to vote.
Courtesy India Today