Next Covid variant likely to be more infectious: WHO 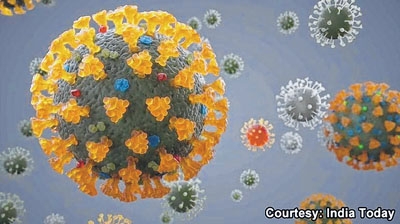 NEW DELHI, Feb 10
Describing the new COVID-19 variants as the "wild card", a top World Health Organisation official has warned that the Omicron will not be the last one and the possibility of other new variants is really high.
The next variant of concern will be more fit and what we mean by that is it will be more transmissible because it will have to overtake what is currently circulating. The big question is whether or not future variants will be more or less severe,” said Maria Van Kerkhove, Covid-19 technical lead at WHO.
During a question and answer session live streamed on WHO’s social media platforms on Tuesday, the WHO COVID-19 Technical Lead Maria Van Kerkhove said that the global health agency is tracking four different versions of Omicron.
"We know a lot about this virus, but we don’t know everything. And quite frankly, the variants are the wild card. So we are tracking this virus in real time as it mutates as it changes. But this virus has a lot of room to move,” she said.
"Omicron is the latest variant of concern. It will not be the last variant of concern that WHO will speak about. The next one, you know, that will come hopefully, it will take some time to get there. But with the level of intensity of spread, the possibility that we will have other variants is really high," she said.
"So we need to ensure that we again, not only increase vaccination coverage, but we also take measures to reduce the spread," she added.
Since the designation of B.1.1.529 as a variant of concern on November 26, 2021, several lineages have been identified. These include Pango lineages BA.1, BA.1.1, BA.2 and BA.3, which are all being monitored by WHO under the umbrella of Omicron’.
"BA.2 is more transmissible than BA.1 so we expect to see BA.2 increasing in detection around the world," Van Kerkhove further said.
According to the UN health agency’s weekly epidemiological report, released on Tuesday, the Omicron variant is increasingly dominant–making up nearly 97 per cent of all cases.
Globally, during the week of January 31 to February 6, the number of new COVID-19 cases decreased by 17 per cent as compared to the number reported during the previous week, while the number of new deaths increased by 7 per cent.
As of February 6, over 392 million confirmed cases and over 5.7 million deaths have been reported globally.
PTI