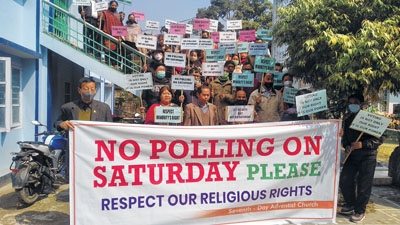 By Our Staff Reporter
IMPHAL, Feb 21: In a show of dissent against the non-rescheduling of the 2nd phase of electoral poll which falls on the auspicious occasion of Lamta Thangja, Umanglai Kanba Lup (UKAL) has called a 48-hour state-wide bandh from midnight of February 24 while Manipur Conference Seventh Day Adventist Church staged a protest at its office complex located at Chingmeirong today.
UKAL arrived at the decision to launch a state-wide 48-hour bandh during the course of a meeting held at the head office of UKAL at Konung Mamang today. The meeting was attended by members of notable organisations as well as UKAL members.
UKAL has stated that the rescheduling of poll dates without any consideration of the cultural significance the poll dates might have on the communities residing in the State is oppressive and verging upon a violation of the rights of that community.
Claiming that the act shows total disregard of the ritual of Saroi Khangba and the community that observes this ritual, UKAL urged the people to support them and the state-wide bandh.
In regards to the 48-hour bandh, UKAL informed that people involved in the field of health care, public service and media will be exempted.
Meanwhile at Chingmeirong, Lungaichungpou Gonmei, Pastor, Manipur Conference Seventh Day Adventist Church expressed his dissent against the rescheduling of poll date from the sideline of the sit-in-protest staged in the office complex of the Church today.
He explained that March 5 falls on a Saturday and it is a day for Sabbath keepers to offer prayers. As such, they will not be able to cast their votes. Therefore, he urged the authorities concerned to reschedule the second phase poll date and fix it on March 7 or 8, or revert to the original poll date of March 3.
It may be noted that the Manipur Conference Seventh Day Adventist Church had submitted a memorandum in this regard to the Election Commission of India through the CEO, Manipur on February 17.
He further said that authorities should respect the voting as well as the religious rights of the people and urged for immediate steps to rectify the situation.
The Pastor also shared that Manipur Conference Seventh Day Adventist Church will be submitting a memorandum to the Prime Minister tomorrow during his visit to the State.