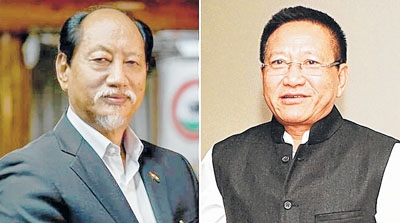 DIMAPUR, Mar 13
The core committee on Naga political issue will seek the ‘last word’ from the Centre on the Naga issue.
United Democratic Alliance chairman TR Zeliang told a Guwahati-based TV channel on Saturday that he, along with Chief Minister Neiphiu Rio and Deputy Chief Minister Y Patton, will meet Union Home Minister Amit Shah to confirm the position of the Government of India on the issue.
During the proposed meeting with Shah, Zeliang said they are going to ask him about the last word from the Government of India. “For that, three of us have decided to meet him to confirm the position of the Government of India”, he said.
In early December last year, Zeliang said he and the Chief Minister had asked Centre’s Interlocutor for Naga peace talks, AK Mishra, to confirm what will be the ‘highest level of offer’ from the Central Government on the issue. “We asked him to come back to us after consulting the Prime Minister and the Home Minister on the last offer,” he said.
Zeliang added that only then they can convey it to the two Naga negotiating parties – the NSCN (IM) and seven-member Naga National Political Groups – and then the public and the elected members of the State Assembly will take a decision.
He pointed out that without any clear cut offer, negotiations have been going on for the last 25 years. Zeliang said they told Mishra they wanted to hear the last word from the Prime Minister level. Mishra is yet to get back to the committee, he said.
Zeliang said they apprised Shah about their interaction with Mishra when they met him on December 23 last year. He assured us to send Mishra with a ‘written paper’ in the first week of January to us.
“We are waiting for that. But because of the Assembly elections in five States, they were all busy. So we are going to ask him again about the last word from the Government of India,” he said.  NE NOW