Congress elections may be advanced at meet today 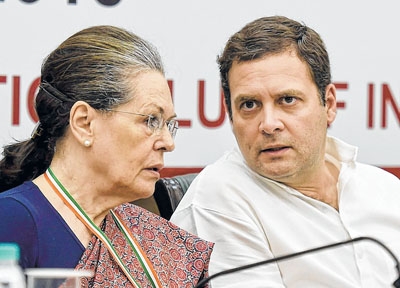 New Delhi, Mar 12
The Congress's top decision-making body, the Congress Working Committee or CWC, will meet at 4 pm tomorrow, three days after a huge defeat in State polls, and is likely to advance internal elections scheduled in Sep-tember amid renewed ques- tions about its leadership, sources said on Saturday.
The Congress faced a wipe-out in State election results declared on Thursday, losing Punjab, one of the last major States under its control, to the Aam Aadmi Party (AAP), and failing to put up a strong fight in three other States where it had hoped for a comeback - Uttarakhand, Goa and Manipur.
In Uttar Pradesh, where the campaign was led by Priyanka Gandhi Vadra, party chief Sonia Gandhi's daughter and sister to senior leader Rahul Gandhi, the Congress got just 2 seats out of 403, a loss of 5 over the last polls. The party got just 2.4 per cent of the vote.
The defeat revived searing criticism of the Gandhi family and an increasing number of party leaders calling for a complete overhaul and a leadership change - a demand that was so far confined to the "G-23" or group of 23 "dissenters" who had written to Sonia Gandhi two years ago.
"There will be no course correction," said senior Congress leaders, who are speaking out within the party against the Gandhis' leadership but do not want to come on record.
"It's too late" for the Congress, these leaders say, adding that this was a disaster foretold many times over. "We are speaking out of anguish, not anger. We were never consulted or allowed to be involved in the election decisions," a senior leader told NDTV. "The party is run by some babus and security personnel," he raged.
Senior Congress leader Shashi Tharoor, a member of the G-23, on Thursday, had tweeted the party could not avoid change while his colleague Jaiveer Shergill appealed for reform and warned against "sugar-coating" the loss.
Some of the dissidents met at veteran leader Ghulam Nabi Azad's home last evening and reportedly discussed the way forward, expressing dismay at the Congress leadership for not taking any corrective steps to revive the party.
They also reportedly expressed concern that the report of the committee formed to evaluate the losses after the last round of assembly poll defeat in Assam, West Bengal, Kerala and Puducherry were not even discussed in the party.
However, Gandhi family loyalists have defended the leadership. In an interview with NDTV, the party's top troubleshooter DK Shiva-kumar on Friday said the Congress cannot be united without its first family and it was "impossible" for it to survive without them.
"Without the Gandhi family, the Congress party cannot stay united. They are key for the unity of the Congress party... It is impossible for the Congress to survive without the Gandhi family," the party's Karnataka unit chief said. NDTV