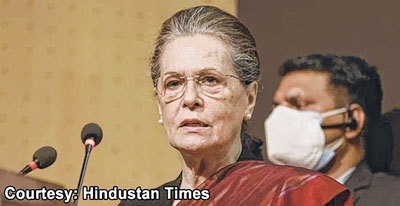 NEW DELHI, Mar 15
Congress president Sonia Gandhi has asked the PCC presidents of Uttar Pradesh, Uttarakhand, Punjab, Goa and Manipur to put in their resignations, party leader Randeep Surjewala informed on Tuesday.
The resignations have been asked in order to facilitate reorganisation of PCC (Pradesh Congress Committee).
This comes just two days after the Congress Working Committee (CWC) discussed the reasons for the party's wipe out in five – Uttar Pradesh, Uttarakhand, Manipur, Goa and Punjab – Assembly polls.
The Congress fared poorly in four of these States and lost Punjab to the Aam Aadmi Party (AAP).
In its first meet after the defeat, the CWC had asked the Congress president to initiate necessary changes in the organisation in order to strengthen it.
"The CWC unanimously reaffirms its faith in the leadership of Smt. Sonia Gandhi and requests the Congress President to lead from the front, address the organisational weaknesses, effect necessary and comprehensive organisational changes in order to take on the political challenges," it had said after the meeting.
N Loken is the president of the Manipur Pradesh Congress Committee. Loken also lost the recent Assembly election to his BJP rival Thounaojam Basanta.
The Congress had bagged just 5 seats in the recent Assembly here in Manipur, down from the 28 it won in the 2017 Assembly election.
Congress was also in power for three consecutive terms from 2002 to 2017 before it lost to the BJP.
MPCC election lined up : Following the recent poll debacle, it has been decided to elect new leaders and office bearers of Manipur Pradesh Congress Committee (MPCC) starting from booth level.
Speaking to media persons at Congress Bhavan here today, ex-MP Pratap Bhanu who has been appointed by the AICC as Pradesh Returning Officer of Manipur said that polling for election of new leaders of All India Congress Committee (AICC) would be held in August this year.
Ahead of the AICC election, polling for election of new leaders of MPCC would be held from March to July. New leaders would be elected starting from booth level to Pradesh level, Pratap Bhanu said.
He informed that the Congress party would launch a mass membership enrolment drive in the State starting from the current month. He said that 33 per cent seats would be reserved for women in the MPCC election scheduled from March to July.
Saying that the Congress party has been collecting a detailed report of the undemocratic practices and means employed by BJP in the recent State Assembly election, Pratap Bhanu said that the AICC would lodge a petition with the ECI and the Supreme Court based on the report.