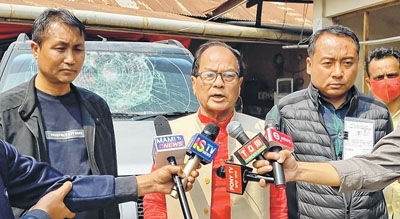 Our Correspondent
MOIRANG, Mar 1: A TUV-300 belonging to agents of NPP candidate in 29-Kumbi AC N Mangi was destroyed during a poll related violence that happened near polling station number 29/9  yesterday.
Speaking to media at a press conference held at the residence of N Mangi today, his agent A Aajanta alleged that during the last hours of   yesterday's poll, BJP polling agent had tried to cast proxy vote but the NPP candidate had objected and the proxy voting was prevented.
Following the incident, the NPP polling agent had sent out an SOS to his candidate and supporters to provide protection as the said polling station was in the area of BJP candidate, he added. Agents and candidate of NPP went to the polling station and they were attack by BJP supporters on their return from the site, A Aajanta alleged.
He added that a case has been registered at Kumbi police station, he added.
Speaking to media, NPP candidate N Mangi said as the polling station is the home polling of BJP candidate, strict security measures were already in place as it was deemed hypersensitive. However the attack on agents of other party for objecting to illegal practice was very unfortunate, he added.
Election should be free and fair and no candidate or political party should coerced or used illegal means to get votes, he added.