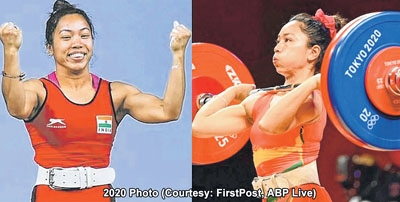 NEW DELHI, Mar 29
Olympic silver medallist weightlifter Mirabai Chanu on Monday won the BBC Indian Sportswoman of The Year award. Chanu created history last year when she became the first Indian weightlifter to clinch a silver medal at the Summer Olympics.
“I am currently training in the United States of America. I will give my best to win gold at this year's Asian and Commonwealth Games. Thanks again to BBC India for honouring me with the BBC Indian Sportswoman of The Year award," Chanu said in a media release.
Young India opener Shafali Verma was awarded the The ‘BBC Emerging Player' award.
Verma is the youngest female cricketer to have played for India.
The first Indian woman to have won a medal at the Olympics in 2000, former weightlifter Karnam Malleswari was presented the ‘BBC Lifetime Achievement' award.
Olympians and the Paralympians from the Tokyo Games were also honoured in this edition of BBC ISWOTY.
Tim Davie, BBC's Director General said, “It's wonderful to be here in Delhi in the BBC's centenary year, and to honour the talented Indian sportswomen who've achieved so much, often in the face of challenging circumstances.” PTI