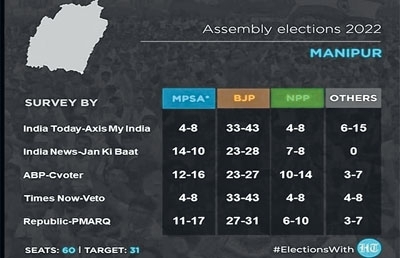 NEW DELHI, Mar 8
Exit polls are not an exact science and have been known to go well off the mark, though sometimes they do get it right. However, they provide political parties and the general public something to debate and dissect till the actual results come in a few days later.
Come March 10 when the results of the Assembly elections for Uttar Pradesh, Punjab, Uttarakhand, Manipur and Goa are declared, it will not just be a verdict on the political parties that contested the polls but also on pollsters who have often erred in reading the public mood. Most exit polls have suggested a BJP victory in Uttar Pradesh and an AAP triumph in Punjab.
One of the most talked about 'correct' exit polls were in 2014 when most pollsters agreed that the BJP would get its highest tally ever—the range varying from a little over 200 to just under 300. News24-Today's Chanakya had raised eyebrows when it predicted 340 seats for the NDA and 70 seats for the UPA. It had the last laugh when the NDA won 334 seats and the UPA ended with 60. The BJP took its tally to 282, while the Congress was reduced to 44.
In 2004, when the confident NDA Government under Atal Bihari Vajpayee called early elections, the received wisdom, and the pollsters' opinion, was that they would return to office. None of the exit polls gave the Congress a chance. Everyone knows how that turned out.
Most polls had predicted a splendid show in Punjab for the AAP in 2017 as well but the Congress, led by Captain Amarinder Singh, emerged as the clear winner. In Uttar Pradesh, while many pollsters gave the BJP an edge the last time, the extent of its victory where it crossed the 300-seat mark was hard for anyone to predict.
Here is a look at exit poll prediction for some of the major elections in the recent past:
The extent of the 2014 Modi wave :
The 'abki baar, Modi sarkaar' wave was too hard to miss in the run up to the 2014 elections and that the UPA, which stumbled from one crisis to another, was a clear secret. Most pollsters gave BJP, the edge but only few could go close to predicting the scale of its victory.
The Headlines Today-Cicero poll showed NDA just touching the 272 seat mark while the Times Now-ORG poll showed the BJP-led formation close to victory but with only 257 seats. The CNN-IBN CSDS poll showed the NDA with 276 seats.
It must be mentioned that every poll showed a range rather than a figure with some scope for fluctuation. For instance, the range predicted for NDA by Times Now-ORG was 249-265.
However, the poll that predicted the NDA crossing the 300-seat mark was News 24-Today's Chanakya which gave 340 seats to the NDA. And the Modi wave ensured, the NDA crossed the 300-figure mark.
Off the mark in 2017 Punjab elections:
Many of the pollsters would like to forget this one. The C-voter poll gave the AAP 59 to 67 seats while the News X-MRC and Today's Chanakya polls showed a neck and neck fight between the Congress and AAP. In the final tally, the Congress swept the State with 77 of the 117 seats while the AAP was left with 20 seats.
The 2017 Uttar Pradesh election - polls miss the massive BJP wave:
Like in the 2014 Lok Sabha polls, exit polls could sense a BJP victory but not the extent. The Times Now-VMR poll showed the BJP ahead with 190 to 210 seats. Other polls indicated a hung parliament. ABP-Lokniti gave 164 to 176 seats to the BJP while C Voter gave just 161 seats. In the actual results, the BJP went past the 300-mark.
The 2019 Lok Sabha polls:
Pollsters had a better day out in 2019 as most of them predicted a clear victory to the BJP-led NDA. The poll broadcast by Times Now, India Today and others showed the NDA crossing the 300-seat mark. There were a few others thought which showed the NDA just short of a majority.
The 2004 Lok Sabha election:
The exit polls got it spectacularly wrong in the 2004 Lok Sabha polls when the BJP appeared ascendant with its 'India Shining' campaign. Following victories in Madhya Pradesh, Chhattisgarh and Rajasthan State elections, Atal Bihari Vajpayee Government dissolved the Parliament early, hoping for re-election. The exit polls predicted BJP-led NDA to secure over 240 to 250 seats.
The prevalent debate was whether the half-way mark of 272 would be breached or not.
But when the actual results came, the numbers were completely opposite and the Congress and its allies got 216 seats against a projection ranging from 170 to 205. BJP just managed to get 187 seats against the projections of over 240 to 250 seats.
The 2020 Bihar State conundrum:
Many of the exit polls showed the RJD-led coalition as the favourite in Bihar but the BJP-JD (U) combine proved them wrong and again stormed back to power. At least two polling agencies, Axis My India Poll and Today’s Chanakya, aired on television channels after voting predicted a clean win for RJD-led grand alliance. Others showed a tight race, with the Grand Alliance having an edge.
Not just an Indian phenomenon:
Pollsters missing the trend is not a phenomenon unique to India. Many of the exit polls in the Donald Trump vs Hillary Clinton contest in the United States failed to read the mood. It came as a surprise to many when Donald Trump emerged victorious.
What exit polls are and why they can go wrong:
Exit polls are usually conducted through interactions with voters after they have cast their votes. They are considered more reliable than opinion polls. However, the sample size often can be inadequate and fail to indicate the mood of the constituency or the state.
Another reason can be the presence of shy or silent voters who may not be very upfront about their choices.
Times of India