Another case of XE variant detected in Gujarat 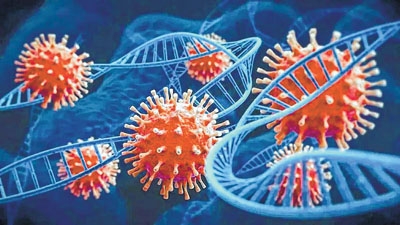 NEW DELHI, Apr 9
Gujarat has detected a case of XE Covid variant, which is said to be highly trans-missible, sources have said. This comes days after Mumbai's civic body repor-ted India's first patient who got affected by the new recombinant variant that has sparked global concerns. The Central Government and Maharashtra's Health Depart-ment, however, had not confirmed the case in India's financial capital.
In Gujarat, the case is believed to be old. The genome sequencing test re- sults, which help in the detection of Covid variants,  can take a few days to weeks.
A statement from Mum-bai's civic body - the Brihanmumbai Municipal Corporation - earlier this week said that the hybrid of two Omicron strains BA.1 and BA.2 was detected in a 50-year-old woman who had traveled to the city from South Africa in February.
But Maharashtra Health Minister Rajesh Tope, a day later, said: "As per information, XE variant is 10 per cent more infectious than the Omicron variant. We will talk more about it in detail after getting a report. Since we have not received a confirmatory report from the Centre or NIB, Maha-rashtra Health Department does not confirm it."
While WHO insisted last week that the new variant could be more transmissible, the country's top virologist said “it is not a point of concern” in vaccinated population.
“Variants will come because people are travelling. Of what we know of the variant (XE) is that it is not a point of concern,” Dr Gagandeep Kang, a leading microbiologist and professor at Christian Medical College in Vellore, was quoted as saying by ANI.
The hybrid strain was first detected in the UK in January. According to the WHO, it could be the most transmissible variant yet and is estimated to spread 10 per cent more easily than BA.2, which itself was more transmissible than original Omicron. Agencies