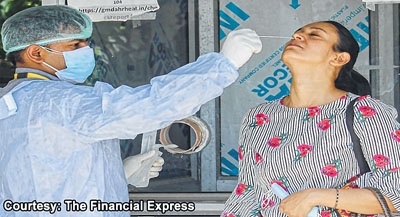 New Delhi, Apr 18
India today recorded a massive jump in its daily Covid counts, raising fears of another spike in infections. As many as 2,183 new Covid cases have been recorded over the past 24 hours, an 89.8 per cent jump from yesterday's case count of 1,150 cases.
A total of 214 deaths have been recorded over the past 24 hours. This, however, includes a backlog of 212 deaths from Kerala--a backlog of 62 deaths has been cleared following Court appeals and the State reported 150 deaths between April 13 and April 16.
The daily positivity rate, an indicator of the spread of the infection in the population, has increased from 0.31 per cent yesterday to 0.83 per cent today.
The number of active cases, however, has seen a slim dip from 11, 558 to 11,542. The country has recorded a total of over 4.30 crore cases since the pandemic struck.
Among the cities witnessing a surge in cases is National capital Delhi, which reported 517 Covid cases. The total number of Covid-infected patients in Delhi, according to yesterday's bulletin, is 1,518 - the highest since March 3 this year.
Several students in Delhi and adjoining cities of Ghaziabad and Noida have tested positive over the past couple of weeks, sparking panic leading to closure of schools.
A survey has shown that the number of people in the National Capital Region reporting someone getting infected in their close social network rose by 500 per cent in the last 15 days, news agency PTI has reported.
The spike in cases is worrying at a time when all States have eased Covid restrictions on public movement. Many States have also removed the fine for not wearing masks in public while advising citizens to continue wearing them to guard against the infection.  NDTV
Masks mandatory in Lucknow, 6 UP districts near Delhi as Covid cases rise : The Uttar Pradesh Government on Monday made it compulsory for people to wear a face mask in public places in capital Lucknow and six NCR districts amid a rise in Covid cases in some adjoining states, an official said.
The increase in Covid cases has had an impact on the districts falling under the falling under the national capital region (NCR). Keeping this in mind, the government has made use of masks mandatory in public places in Gautam Buddh Nagar, Ghaziabad, Hapur, Meerut, Bulandshahr, Baghpat as well as capital Lucknow, an official spokesperson said.
In the last 24 hours, 65 new Covid cases have been confirmed in Gautam Buddh Nagar, 20 in Ghaziabad and 10 in Lucknow, the official said, adding that Chief Minister Yogi Adityanath has ordered "close monitoring" of the situation.
In view of the improving COVID-19 situation, the Uttar Pradesh government had given relaxation in wearing face masks earlier this month.
PTI