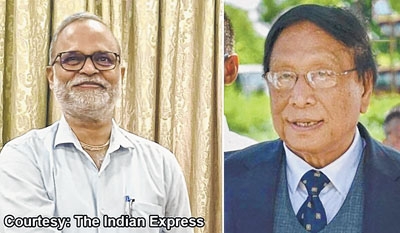 DIMAPUR, Apr 19
Government of India’s Interlocutor for the Naga peace talks AK Mishra, on Tuesday, met NSCN (IM) general secretary Thuingaleng Muivah at the outfit’s Camp Hebron in Nagaland for “informal talks”.
This was for the first time in history, that negotiations on the Naga peace process was held at the NSCN (IM) headquarters in Nagaland.
Interlocutor for the Naga peace talks AK Mishra and NSCN (IM) general secretary Thuingaleng Muivah held a held a one-to-one closed-door meeting at the headquarters of the outfit at Hebron in Nagaland.
Prior to the meeting a reception ceremony was also organised by the NSCN (IM) at Camp Hebron to welcome the Interlocutor for Naga peace talks.
The meeting between AK Mishra and Th Muivah was held at Camp Hebron in Nagaland as Muivah is reportedly ill.
AK Mishra arrived in Nagaland on Monday on a week-long visit.
During his stay in Nagaland, AK Mishra is also likely to meet the Working Committee of the Naga National Political Groups (NNPGs).
The Government of India has been holding talks with both the NSCN (IM) and NNPGs separately.
While talks with the NSCN (IM) have been going on since 1997, NNPGs and the Government of India have been in talks since 2017.
The Government of India had signed the “Framework Agreement” with NSCN (IM) on August 3, 2015 and “Agreed Position” with the NNPGs on November 17, 2017.
Naga peace talks Interlocutor AK Mishra is also likely to meet Nagaland Government’s core committee on Naga political issue.
The core committee of the Nagaland Government on Naga political issue is headed by Chief Minister Neiphiu Rio and also comprises of several Naga civil societies organisations.
North East Now